Fox News’ Restraint on Buzzfeed Paid Off, and Should Be a Lesson to Other Outlets 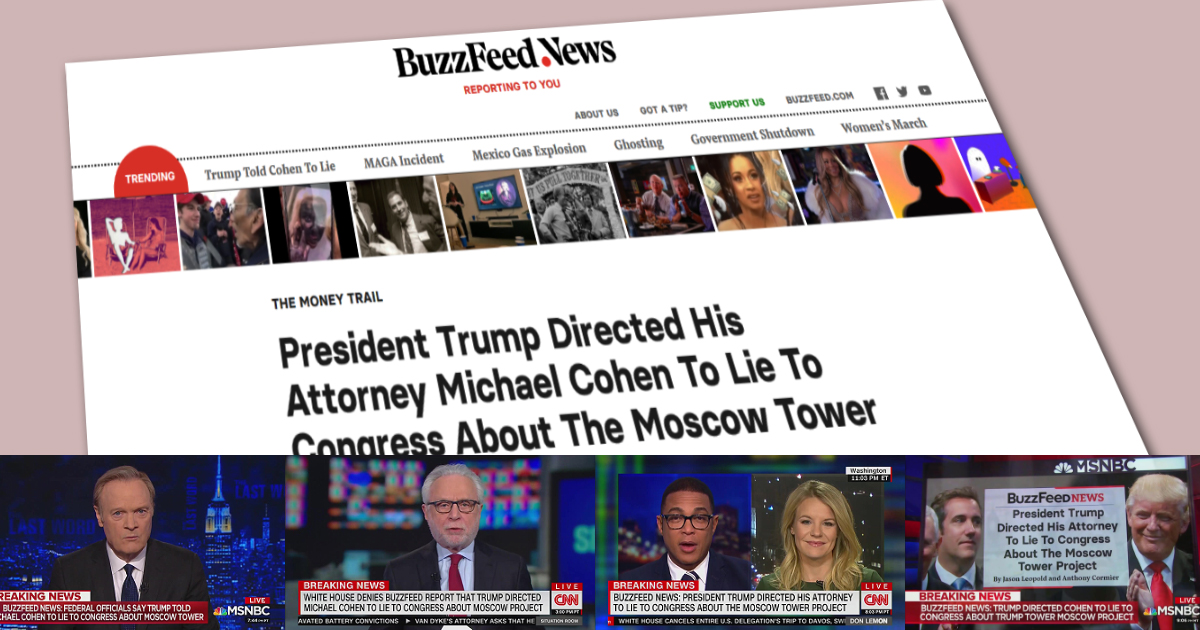 The Buzzfeed debunking debacle (sorry) was bad news (sorry) for the media this weekend, as anyone with a TV or internet access now knows. The ‘huge if true’ article could not have had a heavier roll-out, and therefore its fall, to a rare rejoinder from the Office of the Special Counsel, was that much more disastrous. It was a bad, bad, not at all good, bad moment for the press.

But you don’t have to take the word of a conservative Mediaite column for it: even the press said so. CNN’s Jeffrey Toobin, in fact, said exactly that. “This is a bad day for the news media,” he said. “Let’s not kid ourselves.”

So let’s talk about that line: “Let’s not kid ourselves.”

First, let’s not kid ourselves that Fox News Channel’s caution on this story was exclusively a byproduct of journalistic integrity. The network is plainly pro-Trump, and vice versa. They hate when you say it, but facts don’t care about their feelings. FNC’s opinion hosts are pro-Trump. The news programs, too, skew Trump, as does most of their analysis. The network’s morning show is both cheerleader for and, on occasion, unnamed advisor to the Trump administration. (As opposed to Fox’s Sean Hannity, who is an open advisor.)

That doesn’t mean they can’t have real news, though. The other networks, and many of our readers, will hate someone saying that, but see above about feelings. Yet it is nevertheless true that even strong bias doesn’t mean an outlet can’t have real news, real interviews, or even people competently arguing the opposite opinion. CNN skews anti-Trump, after all, but they have those things. It can be done.

Viewers and consumers can acknowledge the bias of all three major cable news outlets and still be able to say who made the right call, and on the Buzzfeed story, Fox News obviously did. MSNBC and CNN should have made that same call. They had ample reason to. Worse, they’ve had plenty of opportunity to learn that caution these last two years, but still haven’t.

It is in some ways baffling that members of the press can’t see the fatal flaw that made them not only reach too far, but shoot themselves in the foot with the public. A public, we should remember, that is already highly distrustful of the mainstream press.

This matters, not just because they should want to be correct, ethical, smart, or popular, but because when they are not those things, people turn to disreputable sources that confirm their own biases, something about which the media has obsessed, and for which Facebook has faced wrath, for three years. So one would think incautious action with a huge potential downside that could drive everyday Americans to “fake news” websites would be avoided.

It really, really wasn’t, yet CNN and MSNBC probably don’t realize the extent of the failure here. They should.

To begin with, the Buzzfeed story was no slam-dunk. It had two anonymous sources, it cited evidence that the reporters had not themselves examined, and it even though it was consistent with some prior testimony, it was not specifically supported by any prior news.

Hours after it was published, no other outlets had confirmed it. By Friday morning, the two reporters had made seemingly contradictory statements about whether any documents had been made available to them. Investigative reporter Ronan Farrow stated that he had been approached about the same story, but did not run it because of insufficient supporting evidence.

The question of whether the story was solid, and whether Buzzfeed should have run with it, not to mention the track record of one of the reporters, had all been asked about and brought up. This wasn’t quiet. It was all over social media, which every network mines constantly for news and information and new stories. It was on conservative websites and blogs.

There were, in short, dozens of red flags. Alarm bells should have gone off. Sprinting with the story should have seemed like a risky proposition.

Fox, ironically, took heat for choosing not to go deep end, as critics on social media (but not only those on social media) sneered at screenshots of the three networks showing who was covering which news.

But those sneers were backwards. It was CNN and MSNBC carpet-bombing every show with non-stop coverage of “IF TRUE’ scenario-building that made the bad call.

Let’s also not kid ourselves about how spectacular this fail was, either. The Special Counsel’s office remained dead silent on news articles, offering no commentary, confirmation, or pushback for twenty months. On this story, they broke that streak to issue their statement. Here is a refresher on that rare missive:

BuzzFeed’s description of specific statements to the special counsel’s office, and characterization of documents and testimony obtained by this office, regarding Michael Cohen’s congressional testimony are not accurate.

That was a categorical fail, parsing and musing of the spiritually crushed #resistance masses aside. And some outlets were forced to face it. In an article on Friday, also citing anonymous sources, the Washington Post (!) reported that “Mueller’s denial, according to people familiar with the matter, aims to make clear that none of those statements in the story are accurate.”

The article’s core was the specific statements, and what made it unique among other stories on the idea of Trump pushing Cohen to lie was its assertion of “documents and testimony.” You can parse what they are denying, but you cannot parse the fact that the only two aspects that made this story huge news were the exact two aspects specifically named “not accurate” in the rare rebuke.

The questions here though, again, are what can the other networks learn from Fox, and what is the fatal flaw that led them afoul?

Bias can give you one thing that is very important to journalism. Bias, in fact, is an incredibly useful, clarifying tool in one regard. It breeds skepticism. And there should be no higher state of consciousness for the press than skepticism. Skepticism of government leads to accountability. Skepticism of statements leads to clarification. If indeed we are under an assault of fake news, what greater calling is there for a truth-seeker than that of skeptic? Doubt is not just a weapon, it’s a microscope, a scalpel, and a yardstick. Measure yourself against it.

That is the fatal flaw. The networks, journalists, they find these stories about Trump plausible because they are plausible, but that doesn’t make them true. Only the truth makes them true. You see, contrary to a lot of my fellow conservatives or even fellow media critics, I don’t think the big, bad problem with press is Trump hate or Trump derangement or advocacy or bias. It’s a failure to be skeptical as a result of those things that is the problems. It happened during the Kavanaugh process, and it happened here.

The New York Times (!!) on Saturday came close to discovering or revealing this point. The “central assertion pleased many liberals impatient for Mr. Mueller to release his findings,” they wrote. Would that they had taken that notion to its conclusion. But they did not add what you can’t help but conclude: “Thus, some neglected their duty to doubt or question.”

Fox News was skeptical, and rightly so. Your or my assessment of the motive for that skepticism is ultimately moot. What matters is that they embraced it, and because of that, they won this cycle.

The press no longer questions itself. They no longer question their colleagues. They praise antics in the briefing room and share stories of Trump corruption like a relative gossiping on Facebook rather than a news organization seeking facts. In their trench, they trust implicitly and expressly that everyone there with them is acting not just in good faith, but responsibly and wisely.

Don’t. Don’t do that. Stop it. It’s bad. Be skeptical. I, for one, doubt everything you say when first you say it. You should try that, too.

It’s worth noting here that Buzzfeed continues to stand by their report. That, too, should be treated skeptically. As should the Trump camp’s denials. That’s how this works.