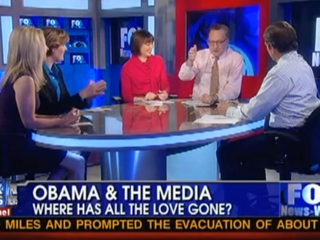 President Obama, at least in part, soured on the media in his public statements recently, telling the graduates at Barnard College that America has to overcome the challenge of a media where “good news doesn’t sell as well as bad news.” On Fox News Watch today, the panel analyzed his statements, somewhat shocked that a President most on the panel perceived to have benefitted from a media bias in 2008 would turn on the press.

“He sounded like a president who thinks the media don’t love him!” host Jon Scott noted, to which Jim Pinkerton agreed, noting that it was “pretty astonishing the President can complain about things like that” when Mitt Romney was now dealing with the Super PAC exposed by the New York Times that Pinkerton argued had nothing to do with him: “there was no evidence this is an ally, this is just some guy.”

Judith Miller brought up the latest Newsweek cover anointing President Obama the “first gay president” as an example of the positive press typical for the President. “He gets astonishingly good press, but I think he’s just decided, ‘why should Republican conservatives be able to beat up on the media? I’m going to do it too, and maybe it will work for me.”

Sally Kohn, the lone left-winger on the panel, noted that the reason Romney was scrutinized the way he is was because “Romney is relatively new to the media as a nominee– he’s going to be vetted the way Obama was” (a line that Pinkerton later scoffed at). She suggested to Republicans that if their candidate was “inaccessible to the press, has a history of flip-flopping and is sort of generally not entirely likable… they should get another candidate.”

Monica Crowley responded that it was unfair to compare the way Republicans are treated in the media with the way Democrats are. “The left has a near monopoly on the media,” she argued, and President Obama “was the biggest beneficiary of the most fawning coverage… ever.” For context, Scott showed the last two covers with both Romney and President Obama on the cover– the latter being the “first gay president;” the former displaying Romney as a Mormon elder missionary jumping joyously. “Those covers are equally gay,” Kohn interjected, which left the panel laughing heartily for some time.