Fox’s The Five Tears Into Chris Matthews: ‘Self-Appointed Protector Of All Things Obama’ 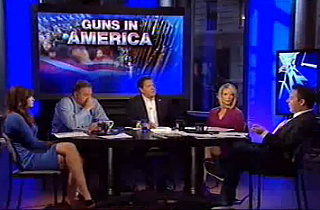 Fox’s The Five went after Chris Matthews this afternoon for a recent “anti-gun rant” in which the MSNBC host “conflated gun control with the assassination of public figures.” Ultimately, the show’s conservative hosts concluded, Matthews is the “self-appointed protector of all things Obama.”

On his show Wednesday afternoon, Matthews said that he does not want to be a part of a “movement to keep semi-automatics flying into the hands of all sorts of people as they are today — the hoarders, survivalists, paranoid and criminal and downright politically nutty” because “the next mass shooter could emerge out of this pack.” He then suggested that the killers of famed political figures like John F. Kennedy, Robert F. Kennedy, and Martin Luther King, Jr. were unstable people who got a hold of guns and used them. “If you are not against the movement, you are with it,” Matthews concluded.

His colleague Kimberly Guilfoyle offered a more cynical take: “No one takes Chris Matthews seriously ever since he said [the president] tickles me all the way up. He is trying to get ratings and create a buzz. He’s doing a good job because we’re talking about it. But the argument is off-base. It doesn’t mean he has credibility about it.”

Lone liberal co-host Bob Beckel resisted calls for him to “interpret” what Matthews was trying to say, but added that “he does things like this to draw attention to himself.” He lamented that the debate has gone “out of hand” when both sides resort to extremes in demonizing their opposition.

“You don’t go to Chris Matthews for logical explanation,” Greg Gutfeld remarked. “That is like going to cemetery to find frozen yogurt. If you don’t support speed limits the president could get hit by a car. If you don’t quit smoking you could die of lung cancer. It’s amazing that Chris Matthews got this far, like a dog who learned to drive a tractor.”

Ultimately, the conservative members of the panel concluded, via Guilfoyle, that Matthews is “a self-appointed protector of all things Obama. He really sees himself in this bizarre angelic role, above us, cracking the whip on everybody.”

“We all know some people are self-appointed persecutors of Obama, too,” Beckel inserted.