Goldie Taylor On Gingrich’s Run: ‘The Question Is, Will Newt Implode Before Or After The Nomination?’ 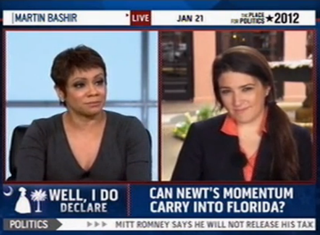 With the 2012 primaries in South Carolina extremely close to their conclusion, many are expecting Newt Gingrich to pull out a win in this key state. On MSNBC tonight, Martin Bashir hosted coverage for the hours before the election returns came in, and with guests Goldie Taylor and Grace Wyler, explored the chances that this could mean the nomination for Gingrich. While the panel agreed this would be a good night for Gingrich, whether he could keep up a positive image in the face of so much controversy appeared to be the bigger issue.

RELATED: Goldie Taylor And Touré Compare Newt Gingrich To Jabba The Hutt And His Supporters To Stormtroopers

Bashir noted that Romney was still winning the female vote in South Carolina polls, asking Taylor whether she believed this was indicative of the Marianne Gingrich interview causing injury to Gingrich’s campaign. “I don’t know that it was an injury that wasn’t already there,” Taylor noted, explaining that “Republican women who weren’t going to vote for Newt Gingrich already know he had been a thrice married man.” For her, the more problematic issue was Gov. Nikki Haley‘s endorsement of Romney– “she’d going to be primaried for it.”

Bashir then turned to Wyler, and embedded reporter for Business Insider, asking the reverse– whether the “open marriage” issue actually helped the candidate. She noted that voters seemed to find that he responded appropriately and “the timing of the interview was bitter,” and felt sympathy. “It’s all about sex and money,” Bashir joked, turning to the money part of this equation with Romney and his tax returns. Taylor predicted that she could see Florida voters caring about his taxes because “they’re going to say, ‘was he paying his fair share?’ and that’s a real issue” for older voters. He does have a serious machine in Florida, but Taylor didn’t think that was as much of an asset as assumed, given that the same was in some ways true in South Carolina, where Gingrich didn’t really have much of an organization until recently.

RELATED: Kirsten Powers: Only Question Is If Gingrich Implodes Before Or After Getting GOP Nomination

Wyler predicted that she could see a Gingrich win “if he can hold it together” into the general election, and Taylor mostly agreed, adding that “primaries are not coronations” and the question as to Gingrich’s implosion was more of a “when” than an “if.”