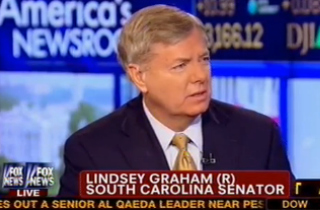 Appearing on Fox News’ Happening Now this morning, Senator Lindsey Graham (R-SC) offered up a stern assessment of how President Obama should proceed with “fiscal cliff” negotiations, warning that the president needs to “man up” in order to help steer America away a debt crisis on par with Greece.

After conceding that Republicans will likely compromise on increasing tax revenues as part of a “cliff”-avoiding plan, Graham then noted that, in return, the president will need to give a little bit on reforming Medicare and Social Security:

“In February or March you have to raise the debt ceiling,” he explained to host Martha MacCallum. “And I can tell you this: there is a hardening on the Republican side. We’re not going to raise the debt ceiling. We’re not going to let Obama borrow any more money or any American Congress borrow any more money until we fix this country from becoming Greece. That requires significant entitlement reform to save Social Security from bankruptcy and Medicare from bankruptcy.”

And so, Graham explained, the GOP will play along and compromise on tax rates because they will then hold the power when it comes to the debt ceiling negotiations a month or so later:

“Yes, we will play that game, Mr. President, because it’s not a game. The game you’re playing is small ball. You’re talking about raising rates on the top 2% that would run the government for 11 days. You just got reelected. How about doing something big that is not liberal? How about doing something big that really is bipartisan? Every big idea he has is a liberal idea that drowns us in debt. How about manning up here, Mr. President and use your mandate to bring this country together to stop us from becoming Greece?”