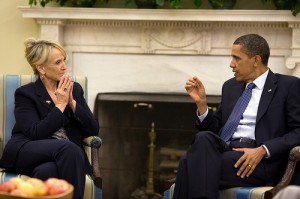 Secretary of State Hillary Clinton made news yesterday when Arizona Governor Jan Brewer noticed a statement that Clinton made in a June 8 interview with an Ecuadoran TV station. Secretary Clinton revealed that the Department of Justice will be filing a lawsuit challenging Arizona’s so-called “Show Me Your Papers” law. A DOJ spokesman wouldn’t confirm this, saying “The department continues to review the law.”

In an interview with Fox News’ Greta Van Susteren, Brewer called the comment “outrageous” (also noting the outrage that Secretary Clinton made the remark to a foreign audience), and complained that the President hadn’t gotten back to her on exactly the 14th day since their last meeting. It’s not like he’s got anything important going on.

There are a few things worth noting here. Greta observes that the President met with Brewer because of “political pressure,” but according to Press Secretary Robert Gibbs, the meeting was scheduled at Brewer’s request, and all they discussed were measures that the President announced in mid-to-late May.

That meeting occurred on June 3, which made yesterday exactly Day 14 since their meeting. Assuming the President made a date-certain commitment to update Brewer, and ignoring events that might take precedence, the day wasn’t even over when Brewer started complaining.

Finally, whatever you think of Arizona’s law, it is remarkable that Greta Van Susteren, a supposed legal expert, would make this statement: (emphasis mine)

Arizona, finally, after being quite patient, steps in, passes a statute, whether it’s constitutional or not, and the reaction now seems to be, by the federal government, “You guys are the bad guys.”

The constitutionality of the Arizona law is just a sidenote, then. What really matters is whether most white people support the law. Funny how the percentages of people supporting the law poll at almost exactly the percentage of the non-Hispanic white population.

This is exactly why we have a Constitution, a Supreme Court, and a Department of Justice, to ensure that the moral and just principles of our country are never overtaken by the tyranny of the majority.

Update: When I originally wrote this piece, I referred to Greta Van Susteren as a “supposed legal expert.” I intended it as shorthand, but in context, it clearly comes off as an insult. What I meant to convey was that her statement was out of step with her qualifications as a legal expert. I was a big fan of Greta’s, beginning with her excellent coverage of the OJ Simpson trial. I did not mean to imply that she’s not a legal expert. In fact, she is among the best legal experts around. I would barely have cared about this remark had it come from some ordinary cable news anchor.