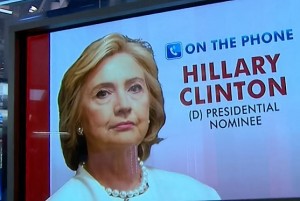 Although the dominant political news story this morning is Democratic presidential nominee Hillary Clinton‘s pitched battle with Donald Trump over his courtship of the racist “alt-right,” the Morning Joe crew had other things on its mind when Hillary called in for an interview Friday morning. Co-hosts Joe Scarborough and Mika Brzezinski devoted 10 minutes of a 15-minute interview to questions about the Clinton Foundation, and in particular, whether accepting foreign donations presented a conflict of interests while Clinton was secretary of state.

Many reporters and pundits have alleged that the Clinton Foundation’s decision not to accept foreign or corporate donations of Hillary is elected president is proof that such donations were a problem when she was at the State Department, but when Brzezinski put that premise to Hillary this morning, Clinton pushed back:

Mika Brzezinski: Are you certain that there are no e-mails or foundation ties to foreign entities that will be revealed that could perhaps permanently impact your presidential prospects?

Hillary Clinton: I am sure and I am sure because i have a very strong foundation of understanding about the foundation, that is, the kind of work the foundation has done is work that went right into providing services to people. As we have said before, neither my husband, my daughter or I have taken a penny for work at the foundation. My work is not influenced by outside sources. I made policy decisions to keep Americans safe. I believe my aides also acted appropriate appropriately. We have gone above and beyond most of the legal requirements, beyond the standards to voluntarily disclose donors and to reduce sources of funding that raised questions — not that we thought they were necessarily legitimate, but to avoid those questions. So we are going to go at this, I believe, in the right way of trying to make sure —

Mika Brzezinski: But it does raise questions. If a Republican candidate who was actually credible was running against you and served as secretary of state and took donations from foreign entities, wouldn’t you be criticizing him or her, and in retrospect, was that a good idea?

Hillary Clinton: I would not be criticizing. I would be looking at the work. People can say whatever they want. I understand that, but if there’s no evidence that there was any conflict I would say, look, I appreciate the work that they did to help 11.5 million people around the world get more affordable medicines, and I appreciate the work that was done to help more people make a living and get a job, and help American kids battle obesity and get better foods.

Hillary also told Scarborough that the foundation wold be “looking at” different ways to transition the work that the Clinton Foundation does on to other entities.