In Defense of Sarah Palin: A Fearless Vow To Never Sit Down And Shut Up 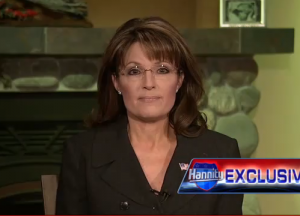 Last night Sarah Palin appeared on Fox News with Sean Hannity, and although some feel all she did was preach to the choir, she actually accomplished a whole lot more with this passionate and, dare I say, courageous appearance. Not only did she rally her conservative troops, but she also laid the foundation for her continued relevance as a national figure while also skillfully establishing why she believed the mainstream media, and liberals in general, despise her. Simply put, she’s the most effective messenger for conservative principles and she will not be silenced.

Despite calling the Arizona shooter “evil” and praying for the families impacted by the tragedy, critics continue to think Palin focused too much on herself as the victim. Yet remember Palin was the one dragged into this conversation, by no choice of her own, with allegations implying she and others somehow contributed to the murders. Therefore, why shouldn’t anyone in her position be entitled to every opportunity to defend themselves against such vitriolic smears?

Palin claimed her controversial video response to the tragedy “wasn’t self-defense, it was defending those who were falsely accused,” which also included other conservative commentators and members of the Tea Party. This eagerness to fight for unrestrained freedom of speech for all and her refusal to apologize for using the term “blood libel” are early signs of Palin’s leadership capabilities and her confidence to never back down, even when under intense fire from the media.

Palin’s tenacity in part derives from her rational understanding of why she is so frequently targeted:

“I know that it isn’t about me personally, but it is about the message, that I am not hesitant at all to spread across this country, and that is that our country is on the wrong track. We’ve got to get it back on the right track . . . to allow us to be prosperous and healthy and safe again. . . . Those on the left hate my message, and they’ll do all that they can to stop me.”

Her message, more specifically hinted at during this appearance, is a growing concern over the debt, the looming energy crisis, and various national security policies.

No matter one’s political beliefs though, it’s hard to dispute that Palin displays a fierce determination in the face of substantial adversity with her promise that “I’m not going to sit down, I’m not going to shut up” about issues in which she believes and with an admirable willingness to “take the darts and the arrows” she receives from all critics while continuing to speak. And when her most significant issue is ensuring that “peaceful dissent and discussion about ideas [is not] stifled by a tragic event,” Palin’s efforts toward this goal should surely be welcomed by all.

Before this interview, some considered Palin at the end of her political career, puke-worthy or not well-educated, while many conservative voices refrained from publicly defending Palin or even suggested dismissing her as radioactive or overly scripted. Did all of these commentators and politicians make inaccurate assessments or premature predictions more reflective of conventional wisdom or their own wishful thinking, rather than based on what now seems to be Palin’s realistic political future? “You betcha!”

Watch all three parts of Palin’s interview from Fox News below and you be the judge of Palin’s performance: