Instead of Doing Their Job, the News Media is ‘Virtue Signaling’ on the Tom Brokaw Allegations
Opinion

Instead of Doing Their Job, the News Media is ‘Virtue Signaling’ on the Tom Brokaw Allegations 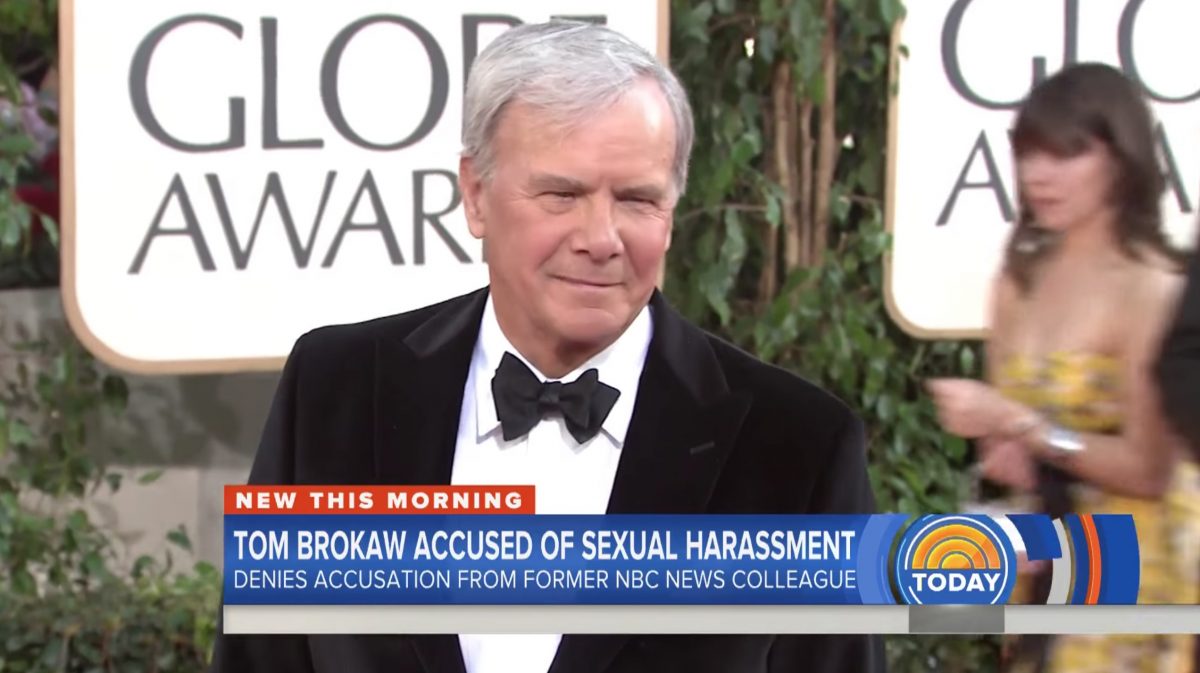 Since early on in the #MeToo movement, I have been very concerned that the news media was dramatically changing the rules regarding the reporting of sexual abuse allegations in a way which was not fair to the accused. According to Twitter, where opinions not approved of by #MeToo are deemed to be totally unacceptable among the elite, this makes me an inherently bad person.

In this context, I have watched with interest how the narrative surrounding sudden allegations of sexual harassment against former NBC anchorman Tom Brokaw has taken twists and turns. Regardless of whether Brokaw is “guilty” of these transgressions, there has been a lot about the coverage which should trouble those who still value some semblance of due process over mob rule.

For the record, I am ambivalent about Brokaw as a character and I have no idea whether he ever did any of the things which former NBC reporter Linda Vester has claimed happened back in the 1990s (two other women, one anonymously, one with a 50-year-old story, have also made some sort of harassment claim against him). However, I think the case for this story to ever be newsworthy to begin with is rather weak, and that much of the coverage since it broke has been, at best, extremely biased against him.

There are no criminal charges here, nor, given the relatively benign allegations and the long time which has elapsed since, could there even theoretically be any. As of yet, there is not a civil judgment, a settlement, or even the filing of a lawsuit by Vester. Brokaw, who is basically retired, currently holds no significant job which would make the allegations relevant to something happening now or in the foreseeable future.

In the “olden days” of the news media (like, say 2014) an allegation of this type would require at least one of these attributes to even be reported by a major news outlet. Given the fact that about a quarter of a century has passed since these particular events allegedly happened, the burden would have probably been even higher than that.

But, for better or worse, #MeToo has radically lowered that threshold. All you need now is a big celebrity and a reasonably credible allegation. Since Vester, a retired news person, was once a well-known and was willing to go on camera to tell her story, that’s all that was really required for the Brokaw allegations to become big news.

Two things which happened next have made the Brokaw narrative a bit different than some of the other #MeToo storylines. First, Brokaw wrote a vigorous and outraged defense — which included attacks on Vester — to his colleagues, which became public.  Second, over 100 women who have worked with Brokaw signed on to a letter supporting him, while remaining silent on the issue of whether Vester is actually telling the truth.

Both of these developments seemed like they came close to allowing Brokaw to survive this storm somewhat unscathed. But then this week the news media seemed to collectively decide that Brokaw was being let off too easy.

NBC’s Megyn Kelly, who has ridden the #MeToo story during the short tenure of her struggling morning show, was the first to criticize those women who were supporting Brokaw. Even though there is no evidence Kelly knows anything that isn’t already in the public record (though, given her history, if Brokaw is eventually excommunicated from NBC, it wouldn’t be a surprise if she suddenly claimed to have some information which she didn’t feel free to currently share), this seemed to change the momentum of the story.

Yesterday, the New York Post (owned by the same company which runs Fox News Channel) via its Page Six gossip column, “reported” that one unnamed named NBC staffer felt pressured to sign the letter in support of Brokaw. In an act of stunning malpractice, the thinly-sourced Page Six item, was instantly picked up, copy and paste style, by a series of news outlets.

Even worse than the fact that only ONE UNNAMED source was deemed credible enough to be considered legitimate news, was the fact that most of the headlines inaccurately indicated that NBC “staffers” (plural) were claiming to have been pressured because the Page Six story had a second, also unnamed, source which said something entirely different.

Don’t any of these copy editors even bother to read the articles they are lifting anymore?!

This lame story had so much impact that numerous commentators, including the usually very smart S.E. Cupp, somehow turned the letter in support of Brokaw into a sign that women are still being subjugated by a pro-harassment culture intended to intimidate potential accusers.

Huh?! Brokaw is effectively retired and has no real power. NBC just fired their biggest news star, Matt Lauer, and we still don’t even know the name of the female co-worker with whom he failed to disclose the consensual affair which caused his instantaneous downfall. No one forced these women to support Brokaw, and no one has any logical reason to be afraid to come forward because they did so in a way that didn’t even remotely criticize Vester.

Then there was the issue of whether NBC was telling its producers to report on the letter itself. In a memo, conveniently leaked to one of the outlets which broke the Vester story, NBC’s top brass simply reminded their staff that it is important to tell both sides of the story and that reporting the existence of letter, which was clearly newsworthy, was obviously part of that equation.

Given the reality that so many people directly connected to NBC are part of the story, it was perfectly appropriate, if not downright obligatory, for this kind of guidance to be provided to a staff which had to be uncertain as to how they should handle it. And yet, in what may be a symbol for how #MeToo has pushed the pendulum too far in the other direction, many in the media are now criticizing NBC for simply reminding its reporters to be fair to the guy who used to be the face of the entire network.

Have we really reached the point where it is somehow fundamentally wrong to report both sides of a sexual harassment story? I thought that’s what news outlets were supposed to do, but I guess these days “virtue signaling” is far more important.