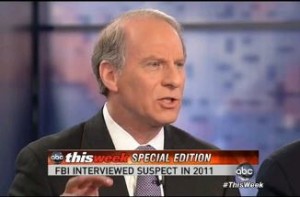 Richard Haas, president of the Council on Foreign Relations, shared some sobering analysis with the panel guests on ABC News’ This Week on Sunday. He said that the Boston Marathon bombings were not merely an isolated event, but the harbinger of a new era of global terrorism with a low barrier to entry. He said that the future of terrorism will look more like the attack on the Boston Marathon than September 11, 2001.

ABC News Chief Global Affairs Correspondent Martha Raddatz asked why, when there were red flags raised about the Tsarnaev brothers by both officials in Moscow and Washington D.C., why no one was tracking the movements of either of the two brothers accused of orchestrating the Boston attack.

“I think you do have to question why wasn’t he followed up?” Raddatz said of Tamerlan Tsarnaev who was killed in a shootout with police last week.

“What this tells you is that you need a long-term strategy for terrorism,” Haas said. “What happened the other day in Boston, unfortunately, is not the exception.”

“This is not a one-off. This was a glimpse of the future,” he continued. “This is granular terrorism that one, two, three people can carry out. We live in a world where power is diffused, where individuals are, in turn, empowered.”

“You don’t need to do something on the scale of 9/11,” Haas added. “That turns out to be much less difficult for us to find out about because there are so many people involved and there’s so many traces…”

New Yorker editor David Remnick agreed and added that the bombs used at the Boston Marathon were crude enough so that they resulted in fewer fatalities than they could have.

George Stephanopoulos asked what the response should be if it turns out that the Tsarnaev brothers had no links to an international terror network. Haas replied that it was incumbent on all Americans to engage and to not dismiss the threat posed by “lone wolf” terrorist actors.