Jake Tapper Grills Ambassador Rice Over Foreign Policy: ‘Why Does The U.S. Seem So Impotent?’
video

Jake Tapper Grills Ambassador Rice Over Foreign Policy: ‘Why Does The U.S. Seem So Impotent?’ 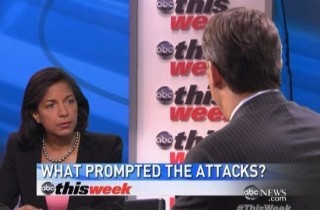 On Sunday’s edition of This Week on ABC, guest host Jake Tapper challenged U.S. Ambassador to the U.N. Susan Rice over the administration’s response to the violent protests in the Middle East and asked whether the United States is perceived as “impotent” and less popular around the world than four years ago.

Rice maintained the narrative that the controversial anti-Islam video “Innocence of Muslims” is to blame for the violent outbursts in Libya and Egypt, saying that the violence “was a spontaneous — not a premeditated — response […] to this very offensive video that was disseminated.”

Tapper then challenged Rice over why there was “not substantial enough” security presence at the Libyan consulate prior to the attacks. “Tragically two of the four Americans there killed were providing security,” she responded. “That was their function. It obviously didn’t prove sufficient to the nature of the attack and sufficient in that moment,” she continued.

“Why were there not marines there to begin with?” Tapper challenged.

“That depends on the circumstances and the requirements. Our presence in Tripoli, as in Benghazi, is relatively new as you’ll recall. We have been back post-revolution, only for a matter of months,” she said before adding that “the protection of American personnel is and will remain our top priority. That’s why we have reinforced our presence in Tripoli and elsewhere.”

Tapper then showed Rice a map of the 33 countries where anti-American protests have recently taken place. “Why does the U.S. seem so impotent, and why is the U.S. even less popular today in some of these Muslim and Arab countries than it was four years ago?”

“Jake, we’re not impotent,” Rice fired back. “We’re not even less popular. I don’t know on what basis you make that judgment.”

“It just seems that the U.S. government is powerless as this maelstrom erupts,” he defended his characterization.

The violent protests, she responded, were “a direct result of a heinous and offensive video that was widely disseminated, that the U.S. government had nothing to do with, which we had made clear is reprehensible and disgusting.”

“We have also been very clear in saying that there is no excuse for violence, that we have condemned it in the strongest possible terms,” she continued.

“It’s quite the opposite of being impotent.”