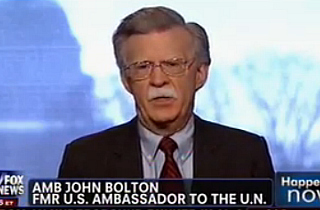 Appearing on Fox’s Happening Now this morning, former U.N. Ambassador John Bolton took to defending President Obama‘s program of targeted assassinations of Americans abroad, calling it what it is: an extension of Bush-era policies.

“It seems to me that the approach that the Obama administration is following is consistent with and really derived from the Bush administration approach to the War on Terror,” Bolton told host Jenna Lee. “And I think it is entirely sensible. Whether it is foreign citizens who are involved with Al Qaeda or American citizens, we are in a war. They have attacked us. We have a congressional authorization to use military force in response. And that’s what’s at stake here.”

In a laughable analogy, Bolton then said, “This is not, you know, robbing the 7-Eleven down on the corner. These people are engaged in war against the United States.”

Except, you know, when they’re not. Take, for instance, 16-year-old Abdulrahman al-Awlaki who, despite showing no signs of taking up arms against the U.S., was killed for being the son of a terrorist leader. Or, perhaps, the hundreds of women and children killed during strikes on weddings, funerals, etc.

Nevertheless, the former Bush official went on to say: “This is not robbing the local Starbucks down at the corner. This is not a criminal law matter. This is an issue that falls under the paradigm of the law of war where the commander-in-chief’s powers are plenary and where we don’t have judicial review of commander-in-chief decisions. And I think it’s a sound case.”

What’s particularly fascinating about this whole drones ordeal is how many conservatives (of a less neocon variety) are jumping to (rightfully) criticize the Obama drone program for two reasons: 1) The targeted killings seem to represent a vast expansion of executive authority without any oversight; and 2) If this were a Bush program exposed, the media and Democrats would be going wild.

The latter is true (even Mika Brzezinski seems to recognize the double-standard), and former is even more undeniably true. But one can’t help but wonder: If this were a Bush program, would those same conservatives be defending it? I suspect they would, because they were incredibly silent under the Bush administration’s similarly vast expansion of executive authority. In many ways, Bush’s actions set the precedent for Obama’s abuses.

In the end, Bolton’s defense of Obama cements an ongoing meme libertarians have shared since this president first took office. We often make the claim that, particularly on issues of foreign policy, there is very little difference between the Democratic and Republican parties. As I’ve repeatedly written here before, many of Obama’s policies on civil liberties, the War on Drugs, and executive authority have extended, if not expanded, Bush’s own horrid policies. Thus, the “Barack W. Bush” or “George W. Obama” meme: 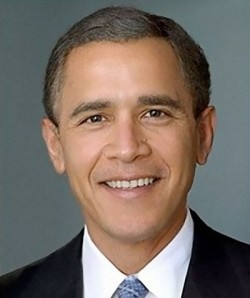 And, beyond that, the oddest part? Dedicated liberals like MSNBC’s Touré have lined up to defend the Obama drone program.