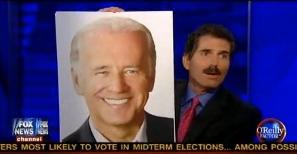 “Are some Americans simply too dumb to vote?” asked Bill O’Reilly last night on The Factor.

He had on John Stossel to answer this question, but Stossel had a laser-focused on one group of apathy: young people. But what about the other idiots in this country?

O’Reilly played a “Jaywalking”-like segment from Stossel, asking New York City youth to identify John Boehner, Nancy Pelosi and The Situation, with predictably edited results. Then Stossel was in studio. His conclusion? “Young people often don’t know anything,” he said.

O’Reilly was more fair and balanced. “I think both parties want people to just blindly pull the lever for them,” he said. “They don’t care whether they know anything or not.”

But Stossel kept on the ‘only young people are dumb’ storyline. “Let them stay in the mall,” he said. “Brain surgery, we don’t want everyone doing brain surgery. And voting is difficult and important too.”

Comparing voting to brain surgery is a pretty, well, dumb analogy to begin with, but Stossel seems to be ignoring a whole separate segment of the dumb population. 18% of this country believe President Obama is a Muslim. If we’re picking people to discourage from voting, maybe these idiots should be grouped into that category too, John? Or how about the idiots who believe Obama wasn’t born in America, or believe 9/11 was an inside job. Maybe they should be banned too, along with those dumb kids who hang out at the mall and don’t do brain surgery. Or how about, I don’t know, not discouraging anyone from voting, and helping to better educate the young and not young.

Stossel will be back next week with a report on how many people know who Joe Biden is. Maybe he’ll take the opportunity to broaden his dumb thesis about dumb people who should and shouldn’t be voting.