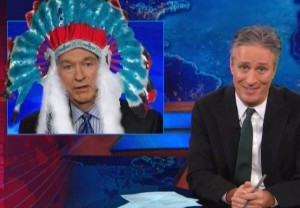 Jon Stewart opened his show tonight by ripping into Mitt Romney (for possibly the last time) over his claim that President Obama beat him because he offered gifts to people. Stewart mocked Romney by pulling out a literal giant gift bag filled with weed, contraceptives, and a piñata full of green cards. But Stewart saved his sharpest jabs for Bill O’Reilly over his implication that Obama’s reelection represents the end of traditional America.

Stewart highlighted how much O’Reilly has bemoaned the end of traditional America, which apparently is a stake in the heart of “Leave it to Beaver” or something. When O’Reilly got around to the issue of whites now in the minority, Stewart pointed out that demographics in the United States are always changing, and there’s nothing you can really do about it.

Stewart got a little personal with O’Reilly, pointing out the United States’ history of bigotry against the Irish. As Stewart pointed out, newspapers that referred to the Irish as horrible people were at least progressive in the sense that they accepted the Irish were people.

Stewart also relaxed O’Reilly’s fears about American’s new religious outline and the “impact of creeping secularism” affecting Catholic support for Obama. As Stewart pointed out, Catholics were marginalized for decades in the U.S., and considering that a former president once sent the army into Utah to fight the Mormons, it’s pretty remarkable we almost had a Mormon president.

Stewart offered O’Reilly some soothing words of advice, telling him not to worry so much, because “America’s greatest tradition” is a “frightened ruling class lamenting the rise of a new ethnically and religiously diverse new class,” and every generation rises in the United States in order to give themselves and their children the opportunity to “shit on the next group” to show up.