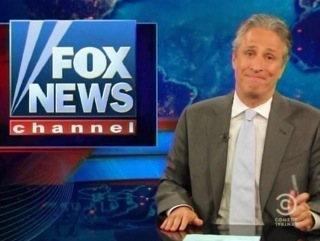 Given that Rupert Murdoch was to present himself before Parliament today, and given that said presentation involved a pie attack, today was ripe for the news picking for Jon Stewart, and he hit it out of the park. With a full recap that included the arrest of Mrs. Weasley that guy from Simply Red Rebekah Brooks, Wendi Deng‘s martial arts, and, of course, an extensive sniping of Fox News for treating NPR far harsher than sister medium News of the World.

The news recap began with Murdoch’s initial statement, one he made after interrupting his son, James, that today was “the most humble day of my life.” “Not so humble you couldn’t wait for your turn to talk!” Stewart cracked. Then he went to the highlight of the hearings– “some idiot tried to pie Murdoch,” but not before his wife Wendi’s “lightning reflex and devastating, Chuck Norris-esque handspeed” saved him.

The Stewart turned to the coverage on Fox News, finding several instances of Fox News personalities downplaying the scandal and complaining that other entities were “piling on.” Stewart joked that he expected them to say it was “the biggest case of piling on since Common read a poem at the White House,” then mocked Cal Thomas for comparing it to rugby: “if you’re going to kiss Rupert Murdoch’s ass with a reference, at least call it Aussie Rules Football.”

Speaking of piling on, Stewart went a bit back in time to see how Fox News handled a media scandal involving another media empire: NPR. That group, it turns out, Fox described as “an agent of Jihadist inquisition,” among many other things– “a reasonably proportioned response,” Stewart noted sarcastically, as opposed to the “overreaction” to the Murdoch case, an “epic” corruption story that is, he joked, “really wasting everyone’s time.” To conclude, Stewart gave us a glimpse of what the Murdoch scandal would look like if it were happening to anyone else– through the words of the nation’s greatest punsters, the New York Post.