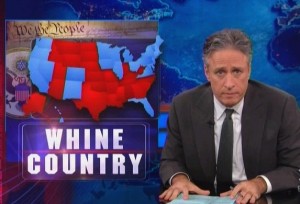 After a long, messy election cycle, it’s time for healing. But much to Jon Stewart‘s chagrin, such as not been the case — as calls for secession and disgruntled CEOs have shown us. And for those CEOs, Stewart had a message: Stop acting like this election has suddenly transformed bosses into “reluctant assholes.”

Following a nod to those among us wanting to separate from the union, Stewart confronted the CEOs who have complained about the effect of President Barack Obama’s Affordable Care Act on their businesses. They’d have to fire employees! Raise prices!

To be fair, Stewart said, the Papa John’s CEO does have a valid point about the additional cost of $8 million per year (due to Obamacare). He then offered a suggestion to counter that cost: Maybe stop giving away so many free pizzas.

Stewart then moved to address those “job creators” directly. “I get it,” he told them. Providing employees with health insurance costs money and, as a group, they tend not to like things that cost money. “But own your layoffs and your policies,” he said. “Let’s stop pretending that suddenly with this election bosses have been transformed into reluctant assholes.”

“Obamacare is just the latest excuse to wriggle out of the social contract,” Stewart said. Quit with the “I’d love to be able to give employees health care, I just can’t” excuse, he said. Not that they don’t have a legitimate gripe against the president: “If Obama had fought harder for single-payer health care, business owners like you would never have to pay another premium in your lives.”

And about those money complaints? “Maybe next time take all the millions you donated for partisan political purposes and pump it back into the type of health care advances that may ultimately increase business productivity.”