Kirsten Powers: ‘Obviously There Is A Bias’ In Media Not Covering Catholic Insurance Lawsuits
video

Kirsten Powers: ‘Obviously There Is A Bias’ In Media Not Covering Catholic Insurance Lawsuits 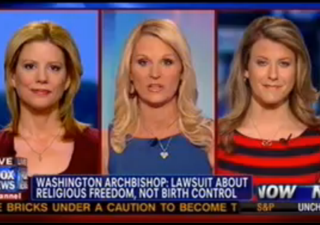 The struggle between the federal government and the Catholic Church in whether the latter should be required to purchase insurance for its employees including birth control coverage continues, as 43 Catholic institutions have sued the White House over the issue. On Fox News today, Kirsten Powers and Gretchen Hamel debated the struggle between women’s rights and religious freedom and, in particular, the media’s reaction to the public discourse, and its comparative silence on the lawsuits when indicated to Powers that “obviously there is a bias.”

RELATED: Huckabee: Ignoring Catholic Lawsuits Against Obama ‘Like Not Covering The ‘I Have A Dream’ Speech’

Powers did not agree with the Church’s position to not provide health insurance coverage in this specific instance, describing it as “church overreach” to intrude into the services a doctor provides to an employee, but explained that she understood the Church’s position. “I think they are acting in good faith– I don’t think this is some anti-woman campaign; they really feel this is infringement on their beliefs,” she told host Juliet Huddy. More importantly, she added, the Church likely sees the issue as a “slippery slope” that will lead to the government intruding on other issues aside from birth control.

Hamel found it “highly ironic” that religious freedom was at issue on Memorial Day, a day to celebrate those who protect our freedoms. She didn’t see the overreach issue with the Church, but with the government. “We have a government that is continuously governing and telling people what they should do and they are spending more.” Huddy then asked about the lawsuits against the White House coming from Catholic institutions. “Obviously there is a bias behind because when it came to covering this from the perspective of covering this as a war on women… it was pretty startling how much time they spent on it,” Powers argued. She noted there appeared also to not be “a lot of interest in understanding where the church is coming from” on the part of the media.