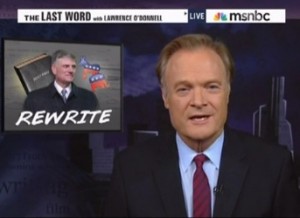 The Rev. Franklin Graham‘s appearance on Tuesday’s Morning Joe is a fine example of created-for-cable “news.” Graham, son of revered teleevangelist Billy Graham, spent the morning in a logic-free attack on President Obama‘s faith, which was then shopped to the White House for phase two, and which has now progressed to the Last Word phase. In this case, MSNBC host Lawrence O’Donnell attempts to bring down the curtain on Graham’s absurd attacks in Tuesday night’s “Rewrite” segment.

Calling stage 3 the “last word” phase is just a neat coincidence, meant to convey the stage in a manufactured “news” story’s life in which, having been given life by an enabling news media, and given legs by asking someone who matters about it, a political commentator then tries to whack it apart like a pinata. In this case, it is Lawrence O’Donnell wielding the stick, and he does a good job of asking, and answering, some of the right questions about the latest Franklin Graham “controversy.”

In case you missed it, Rev. Graham appeared on Morning Joe this morning and, in the course of conversation, revealed that he can’t say, for sure, if President Obama is a Christian, his “logic” being that only God knows what’s in a man’s heart. Then, I guess he turned into God, because he was suddenly certain that Rick Santorum is a Christian, and even Newt Gingrich got the Graham nod (sorry, Mitt Romney! No Mormons Need Apply!).

O’Donnell spent a good part of the Rewrite explaining why Rev. Franklin Graham goes on TV and says crazy things about President Obama maybe not being a Christian, or maybe being a Muslim, or maybe being a secret Kenyan!

“Franklin Graham, just like his daddy before him, is very rich and very famous.” O’Donnell said. “If he’s given up anything to follow Christ, it sure isn’t money. He makes a minimum, minimum of $750,000 a year, and possibly vastly more than that that we can’t easily trace. To make that kind of money as a semicoherent preacher, who is not nearly as dynamic in the pulpit as any randomly selected below average baptist preacher, he needs fame.”

O’Donnell goes on to say that, having “established that he uses politics to get on television to maintain his fame, in order to maintain his very, very, very high income,” he offers “what guides Franklin Graham’s every word about politics.”

“Have you ever voted for a Democrat for president?” O’Donnell asks Graham, in a clip from an old interview.

“No. i’ve never voted for a Democrat for president.” Graham responds.

So, if I’m understanding this correctly, Rev. Franklin Graham is a fame-whoring preacher who cheapens his faith, cheapens all faith, by twisting it to suit his personal political beliefs. Great. Phase 3 complete.

What I’m waiting for is Phase 4, where Franklin Graham makes the rounds on cable news to exploit Phases 1-3, which in  my view illustrates the real burning question here. There’s another reason Franklin Graham goes on TV to talk about politics: people ask him to. Why do they do that?

The obvious answer is “because people watch,” but that’s no excuse. People would watch Ultimate Live-Kitten-Glove Boxing if they could, but that doesn’t mean you should put it on TV.