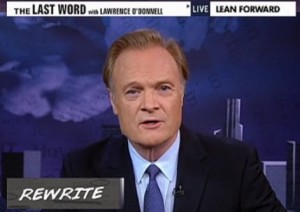 The Last Word host Lawrence O’Donnell made some glib, provocative remarks about Mormonism as an “invented religion” last week, in response to Mitt Romney’s attack on President Obama. Last night, O’Donnell revealed that he had experienced quite a backlash over the comments, which he declined to repeat, and apologized for them. Ironically, O’Donnell’s central point last week was a denunciation of religious intolerance, demonstrating that when you fight fire with fire, sometimes you just get more fire.

In the April 3 “Rewrite” segment in question, O’Donnell boiled the origins of Mormonism down to “a guy in upstate New York” who “got caught having sex with the maid and explained to his wife that God told him to do it.”

He was responding to a Mitt Romney attack in which Romney said President Obama was trying to “establish a religion in America known as secularism,” which is a bit like trying to establish a dance craze called “The Standing Perfectly Still.”

During his apology in last night’s “Rewrite (which, technically, was a Re-Rewrite),” O’Donnell apologized for his “word choice” and “insensitive phrasing,” but not necessarily for the substance of his remarks.

“I am truly sorry if I said something inaccurate about Joseph Smith,” O’Donnell said, “and I am happy to provide time on this show to a Church of Latter Day Saints spokesman to correct any inaccuracy.”

On that score, O’Donnell may have “invented” causation from correlation, but there is some factual basis for his claim.

O’Donnell expressed regret that his comments distracted from his central point, but the backlash to his segment actually helps to underscore a point that I made about another O’Donnell segment on Mitt Romney and Mormonism.

The night before he offended with his Joseph Smith remarks, O’Donnell did a segment about how the press gives Romney a pass on the Mormon Church’s racist history, specifically their policy of banning black men from the priesthood, which continued until 1978.

Mitt Romney was 31 years old when that happened (also the year Garfield was born), yet the same press that dissected then-Sen. Barack Obama’s sporadic attendance at Rev. Jeremiah Wright‘s church ask nothing to a man who spent 31 years supporting such a racist policy with his presence, and with his dollars.

I chalked this discrepancy up to two things: the press is reticent to alienate huge swaths of people who would object to a perceived attack on (almost) any religion, and what I called one of the more self-serving aspects of white privilege, cultural self-forgiveness.

In his apology, O’Donnell noted that much of the backlash came from “other religious viewers,” and later noted that “not a single person who has objected to what I said has also objected to Mitt Romney’s lie about President Obama’s religion.”

As Bill O’Reilly pointed out, all religions have tough-to-explain quirks (although most aren’t quite this recent), and just like the press, people  are very protective of those quirk-laden beliefs, even if they’re ones they don’t share. An attack on one is an attack on all. Well, almost. Once again, Barack Obama is fair game.

Here’s the segment, from MSNBC: