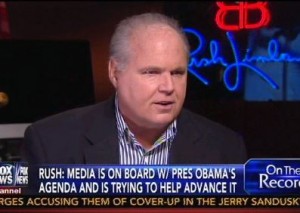 Rush Limbaugh joined Greta Van Susteren for the full hour Tuesday night, and Limbaugh spent the first segment of the program bashing President Obama, sharing the “Limbaugh Theorem” for how the president governs, and taking the “slavish media” to task for not holding him accountable. He also had some choice words for Republicans capitulating too much to the Democratic agenda.

On the “phony scandals” controversy, Limbaugh admitted he was stunned that the president was able to survive 2012 with the bad economy on his back. He came up with the “Limbaugh theorem” to explain why so many people hate Obama’s policies yet like him and vote for him: he’s “constantly campaigning” and never governing who keeps insisting nothing that ever happens in Washington is his fault.

Limbaugh surmised that Obama could only get away with this because of the “slavish media” that will never call him out on anything. He said that most journalists are “all part of the elitist New York-Washington-Boston media academic corridor and they think they are Obama.”

He admitted the 2010 midterms, while it resulted in Republican gains, were not necessarily that good for the party, because no one was “articulating an agenda” and all the Republican votes were “anti-Obama” votes, not votes for a viable alternative. He also slammed Republican leadership for brushing aside the tea party and “its conservative base on a number of issues,” saying the big problem with the GOP is too much capitulation to what the Democrats want.

Why doesn’t the Republican Party embrace them, bring them in and try to grow and have at least come up with a way to reach out and attach themselves to these people, a majority of voters? Instead they’re capitulating with what the Democrats want. And not just on this, but on immigration, amnesty, whatever you want to call it.