Maddow: GOPers Defending Romney Over Egypt Are Putting Reputations On The Line
video

Maddow: GOPers Defending Romney Over Egypt Are Putting Reputations On The Line 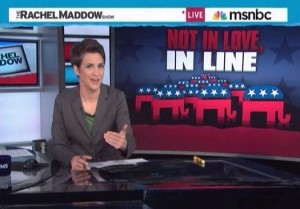 While the Obama administration has been getting some criticism over its response to the violence in Egypt and Libya, Rachel Maddow focused on how quickly Mitt Romney reacted to the situation, before the attacks on the U.S. embassy in Egypt were over. She said that Romney’s response was a preview of a president who would react to a foreign policy crisis by “rush[ing] to the microphones before the attack was even over.”

Maddow highlighted a clip of Senator Rob Portman saying that the U.S. embassy issued a statement that amounted to an “apology.” When corrected about the timeline over the statement and the attacks, Maddow said that Portman basically admitted “that he did not know what he was talking about.”

She also pointed out that Romney had issued his initial statement, which was essentially “attacking the embassy in Cairo” for its statement, while the embassy was being attacked. Maddow criticized Romney for not taking time to wait until the violence was over before issuing his statement, bemoaning how a situation that would normally be above politicization “became very much a time for politics,” with even some Republicans distancing themselves from Romney’s remarks.

However, Republicans started to come out in droves in support of the way Romney immediately reacted to the news. Maddow said that these Republicans are risking their reputations, and criticized Romney for “rush[ing] to the microphones before the attack was even over.”