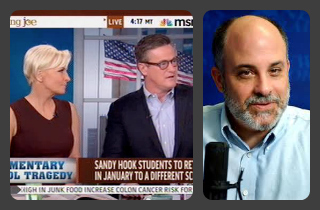 Levin repeatedly mocked Scarborough, calling him “Morning Schmo” and mimicking what he believes is the MSNBC host’s “stuttering problem” by repeatedly playing the same stutter clip.

Scarborough accused Cruz of putting forward a “willfully ignorant statement about [Feinstein’s gun control] bill violating the Second Amendment.” The MSNBC host asked who Cruz is even “playing for.”

“Who are you playing for, you big jerk?” Levin asked before going into a rant against Scarborough and his entire career:

“Is this what it takes to get a paycheck these days? You had to resign the House for some reason. You couldn’t make it in talk radio for obvious reasons. They wouldn’t take you over at Fox, which was good judgment. You wind up on the eighth-tier cable station, MSLSD, with all the other schmucks. Didn’t take much to buy you off, did it pal? You haven’t said a damn thing that’s sensible. You haven’t told anybody what the Supreme Court case is. You haven’t told anybody what the Supreme Court held. You haven’t discussed at all how the Second Amendment came to be. You’re just a rambling, marble-mouthed buffoon with that ditz sitting next to you there. ‘Tell ‘em Joe, tell ‘em Joe. Tell ‘em.'”

Levin later trashed Scarborough as being a “miscreant malcontent,” a “moron,” unqualified to “work the fryer at McDonald’s,” and part of a “whole conga line of freaks” on “MSLSD.”