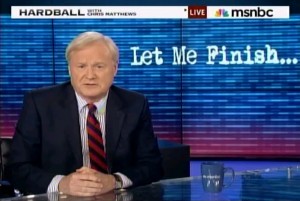 With more and more people discussing Chris Matthews and his verbal attacks on Congresswoman Michele Bachmann, today Matthews continued with a slightly more respectful assault on Bachmann, this time trying to just focus on discrediting her statements rather than personally attacking her. Matthews listed all the American presidents who owned slaves in an attempt to finally disprove Bachmann’s claim that the founders worked tirelessly to end slavery in their lifetime.

Although Matthews introduced the segment by telling Bachmann she should be happy literacy tests are no longer required in America, Matthews then focused on correcting the factual record by saying the founders and many American presidents since the founders, including George Washington, Thomas Jefferson, James Madison, James Monroe, Andrew Jackson, John Tyler, James Polk, Andrew Johnson and many other presidents, all had slaves and in fact did not work tirelessly to end slavery. From there Matthews offered an indictment of many of his frequent targets:

If you want to get your history from the Congresswoman from Minnesota, that’s of course an option. Or you can check it out yourself. I recommend in this and in so many other cases, you do some work yourself. President Reagan used to say trust, but verify. When it comes to people like Bachmann and Beck and Savage and Palin and the rest of this jamboree, I think the smart move is to start with the verify.

This seems to be the final hurrah for Matthews on the Bachmann slavery comment, so unless Glenn Beck or Michael Savage respond, Matthews’ exciting fascination with Bachmann might be over, but likely only until she next has something to say.