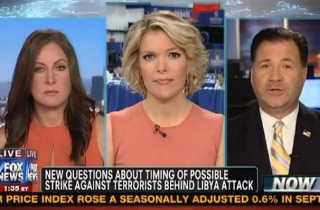 Radio hosts Lars Larson and Leslie Marshall clashed this afternoon on Megyn Kelly‘s America Live over whether the potential strikes on Libya were deliberately leaked as a distraction from the fallout over the administration’s handling of the Benghazi consulate attacks.

In what Kelly described as a “highly cynical” take, conservative Larson said that terrorists are “beating us bloody” and that the administration floated out this potential strike on Libya as “the president’s way of distracting.”

Larson then likened President Barack Obama to one of his predecessors: “He did learn a few things from Bill Clinton when Monica [Lewinsky] was about to testify and Clinton announced that we were ready to send missiles. It was a great way to distract the press. Floated it out there, and I think it’s more of our people killed. Again, that is the president’s [mode of operation],” he said.

Liberal panelist Marshall challenged Larson to send her the actual figures that show where al Qaeda is “bloodying up” Americans around the world. Larson then criticized the president for drone-bombing potential terrorists rather than capturing them and isolating them far off to “squeeze” them for information.

Kelly then asked the panelists whether a strike force attack on Libya before the November 6th election could be interpreted as a political move with serious fallout. Marshall responded that this problem goes beyond the election, deeply rooted in terrorist holdings in parts of Libya and Mali, and a possible consequence of striking them would be increased ground support among those enemy combatants.

Larson agreed that the risks are high, but added that “for this president, everything is political. That’s why Joe Biden and Valerie Jarrett both told the president don’t even go after [Osama] bin Laden because politically it could be too damaging.”