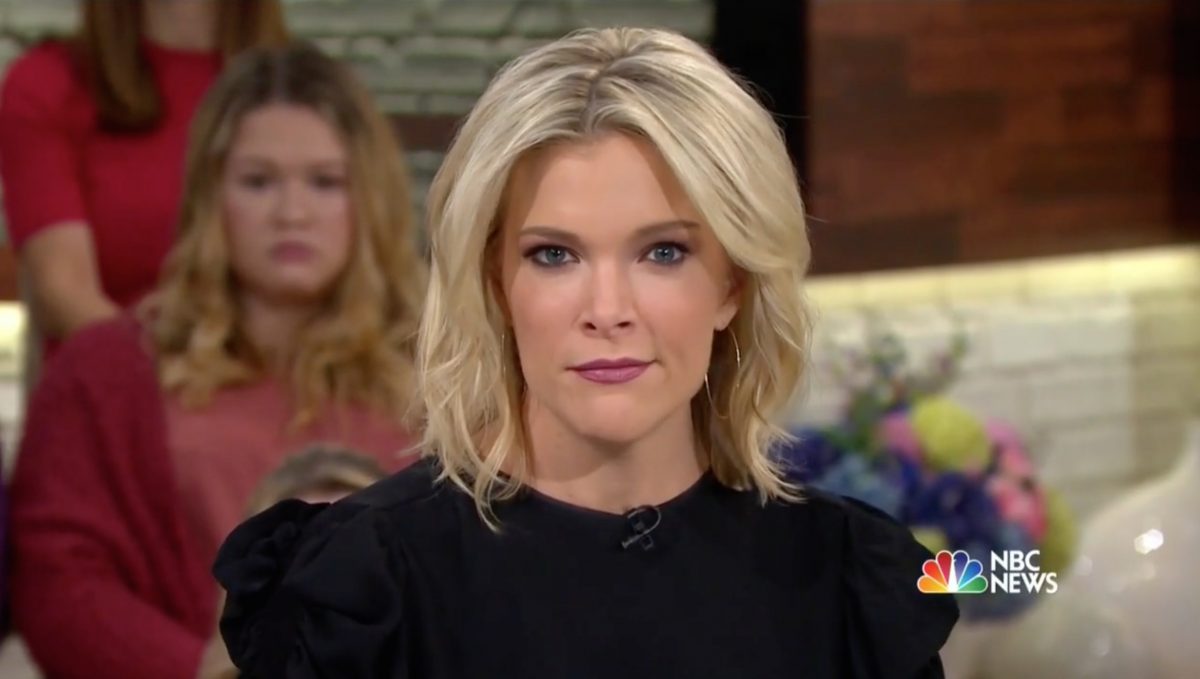 Less than two years ago, Megyn Kelly was the biggest new star of NBC News and was supposed to revolutionize the network talk show format. By Monday, she likely will not even be allowed in the building at 30 Rockefeller Center without an escort, and the news-based, opinion-oriented talk show is likely dead for the foreseeable future.

All of this is supposedly happening because of the “blackface” controversy into which she stepped during a seemingly harmless segment about Halloween costumes. But, in the real world, that had almost nothing to do with her demise.

Let’s be clear. She didn’t do her show IN blackface. She didn’t urge kids to use blackface in their Halloween costumes. All she really did was, inartfully, ask a question which, under better circumstances, might have actually made for an interesting discussion.

Immediately, a huge firestorm erupted on Twitter, fueled by forces which had almost nothing to do with alleged outrage over the asking of this question. A lot of it had all the markings of pure political payback, on multiple levels.

It is not a coincidence that many of the “journalists” who were stoking the “blackface” controversy just happened to be those most active in the #MeToo movement, of which Kelly was once seen as a big backer. However, when she supported Brett Kavanaugh during his confirmation battle, she was apparently stripped of her #MeToo card and the protection from which those in good favor with that cause benefit.

With her #MeToo card revoked, and having long-ago lost her conservative street cred by having dissed the Fox News world, she had no partisan cult on which she could count to rush to her defense. Since her ratings were never very good, she was immediately vulnerable to internal attack once her blood started to seep into the water.

Because she was grossly overpaid, and had taken airtime away from other Today show staffers at NBC, there was clearly internal resentment against her. Contrary to public misperception, I don’t think she helped herself in that realm when she recently went out of her way to attack the already decapitated Matt Lauer, who still remains personally popular among some on-air personalities there (there are actually some striking similarities between the way Kelly and Lauer both may have been set up by NBC for a fall).

What happened next had all the markings of an orchestrated take down of Kelly. She was forced into a tearful on-air apology (if there is one lesson that everyone public person should learn from President Trump it is that apologies almost never work because they are perceived by the media mob as a guilty plea) which only made things worse by keeping the story alive.

Most tellingly, it was NBC itself which did the most to keep the overblown controversy going. The Today show’s own Al Roker — one of those who had lost airtime when Kelly’s show was added — was bizarrely given an on-air platform to declare that Kelly’s apology was insufficient.

At that point, nearly everyone at NBC had what they wanted. Kelly was damaged goods with no way to fight back, the executive suits had their excuse to get rid of her in a way that didn’t force them to admit that the show itself was a mistake, and the rest of the staff at NBC got their personal vengeance.

But this story is much larger than the demise of career which took a wrong turn when Kelly got too big for her “conservative” media britches. This is also about the death of the entire talk show format on a “mainstream” network.

If a star as big as Megyn Kelly can be ousted in two days after basically only asking an unscripted question, then there is simply no possible way for an issue-based talk show to survive on a network like NBC. A real talk show, even one which tried its best — in an ill-advised gambit to try to avoid the “Trump Trap” — to not be overtly political, must be able feel free to at least mildly challenge the audience or it quickly becomes extremely predictable and boring, all while losing its audience.

In other words, by hiring Megyn Kelly to do a semi-serious talk show, NBC tried to have it both ways and pleased absolutely no one. She eventually offended the non-political crowd too much, all while not being allowed the freedom of speech and topic to bring in an audience which might have wanted something less safe than the typical mindless drivel which usually comes from network morning talk shows.

So, with the Megyn Kelly experiment failing so spectacularly, it is very difficult to see how something like this ever gets tried again. NBC will quickly go back to something totally substance-free and politically correct during Kelly’s hour, and everyone will safely keep their cushy gigs, regardless of how boring the content is.

As someone who wishes some network would actually give a legitimate talk show a try,  the saddest part of this fiasco is that the format is now going away without anyone every really trying to execute it properly (paring Kelly with, say, Van Jones would have been blockbuster programing). We now live in a media landscape where opinion-based content must be designed to appeal to a partisan cult, and everything else must be so safe as to never offend anyone.

That reality is as dull as it is unhealthy.