Michael Steele Talks 2012 With Rachel Maddow: ‘The Field Is Pretty Much Set’ 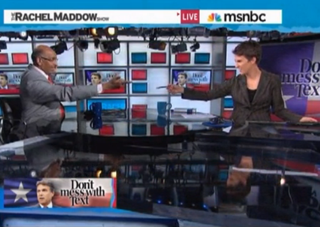 Michael Steele‘s position as one of the most prominent voices on MSNBC means that he will, on occasion, find himself in a segment like this one, where Rachel Maddow notes the inherent discrepancies between Rick Perry the author and the candidate, points out the lack of enthusiasm surrounding New York governor George Pataki‘s probable run, and questions Jon Huntsman‘s chances strongly. Yet tonight, Steele took it in strike, defending Perry’s attempts to “finesse” the opinions in his book and arguing the Republican field is “pretty much set.”

Perry’s latest controversy are claims in his book, Fed Up, where he talks about some entitlement programs as being unconstitutional. “His campaign is saying nothing in this book about entitlements has anything to do with his real positions,” Maddow noted, asking Steele whether this is “how we should expect the Perry campaign to operate.” Steele responded that the book was nine months old, and “nine months ago in politics is a long time” in which to remember positions, which means the Perry campaign was finding a way to “finesse the answer in a way that he doesn’t come out as anti-entitlement programs.” As for the unconstitutional claims, Steele argued that he didn’t call them “unconstitutional”– “he said something about the question of its constitutionality.” Maddow didn’t buy it.

Maddow then asked Steele to evaluate the chances of various candidates, to which Steele replied generally that he believed the “field is pretty much set” and that he expected Jon Huntsman to “resonate with a significant number of Republican voters,” his test being the next debate where he must attack the candidates to their faces and not “pull a Pawlenty, where confronted with the very people he is talking about, saying ‘my bad.'” He even gave Pataki a chance, but implored to the party to wrap up letting people in the race. “Whoever is in is in, go do you thing, run,” he argued, “stop all this dog and pony nonsense about getting in the race.”