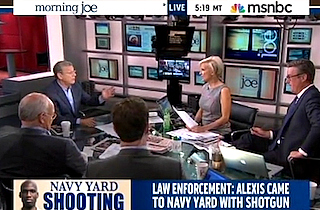 Yahoo! News columnist Jeff Greenfield fought back against a discussion implicating violent video games, in part, for the recent prevalence of mass shootings, arguing that “new mediums” from comic books to rock and roll always get blamed for violence.

“The comic books, don’t even get me started,” co-host Mika Brzezinski said after a discussion about mental health reform. “They are a part of this, too.”

“I know this drives liberals and library libertarians crazy,” Joe Scarborough said. “I grew up seeing my friends simulate murdering people thousands of times. That has continued through the years, and it’s gotten even worse. Grand Theft Auto 5—my god, after Grand Theft Auto 2, I was like, no, that’s not coming into our house again. Of course, there are millions of people that use video games that don’t do anything. But after Newtown, as I said, I know who this guy is without knowing who the guy was.”

“Sixty years ago under the instruction of a psychologist named Dr. Frederick Wertham, who wrote a book called Seduction of the Innocents, you know what was considered the threat from the part of young people? Comic books,” Greenfield said. “They were censored out of existence by the New York Comics Code Authority. Every time there’s a new medium, it is pointed to as the source of horrible behavior. It’s comic books, it’s rock and roll, it’s video games. Back in the days of Pac-Man, even! I guess it was supposed to desensitize people’s brains.”

“I’m gonna sit down with you and I’m gonna show you,” Scarborough said of the video games. “They are a long cry from comic books, brother. Long cry from Spiderman.”

“Remember Tales from the Crypt, back in 1950?” Greenfield said. “With chopped heads off? It wasn’t that far. I’m only saying that the notion that here’s the magic bullet—if you’ll pardon the expression bullet—that is the cause of it, is something we do, but it may not be the answer we think it is.”