Nancy Pelosi: Requiring Wealthy Americans To Pay Even More Is ‘Not Off The Table’
video

Nancy Pelosi: Requiring Wealthy Americans To Pay Even More Is ‘Not Off The Table’ 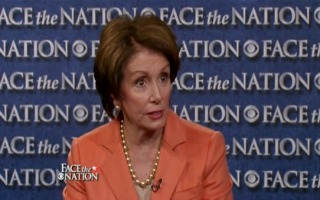 House Minority Leader Nancy Pelosi told Bob Schieffer on CBS’ Face The Nation Sunday that she wouldn’t rule out requiring wealthy Americans to pay more in order to raise government revenue. “I’m saying that’s not off the table,” she said.

When asked if the revenue side of the fiscal problem was “taken care of,” Pelosi responded, “no.” The president originally wanted $1.6 trillion in revenue but took it down to $1.2 trillion for the fiscal cliff compromise, she said. According to Pelosi, that’s not enough.

Even after the fiscal cliff deal raised tax rates on earners above $400,000 worth of income, Pelosi said there needs to be more discussion on how to raise government revenue. Included in that discussion should be changes to tax laws and a reformation of the tax code to close loopholes.

Her idea, she said, is to comprehensively ask, “How much more revenue can we get, as we go forward?”

RELATED: Lindsay Graham: ‘All Of Us Should Be Fired’ If Congress Doesn’t Have A Plan To Reduce Debt

Peloso said she believes a key measure of fixing the economic problem is to focus on what creates growth. She added, “If it works for us, if it grows our economy, if it’s something that justifies its existence, it should be there.” One thing that is completely off the table, however, is asking the middle class to pay more.

“Put it all on the table and see what’s working,” she said. “Frankly, I’m fairly agnostic about what it could be.”