NBC News Reporter Blames U.S. For Not Recognizing Hamas And Not ‘Reining In’ Israel 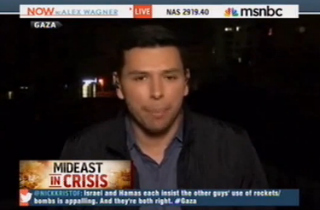 Appearing on MSNBC’s NOW with Alex Wagner this afternoon, NBC News reporter Ayman Mohyeldin seemed to take a strong position, rather than just reporting, on the United States’ role in resolving the Israeli-Palestinian conflict. He effectively blamed the unresolved crisis on the United States’ refusal to recognize Hamas and for not doing enough to rein in Israel’s military actions.

When host Wagner asked Mohyeldin to discuss what America’s role could be in resolving the conflict, Mohyeldin began by talking about what those in the region think but then offered his own analysis:

The United States can definitely play a pivotal role. I don’t think that people in this part of the world feel it has played the role it should be playing and that comes down to two very important factors: one, the United States does not have any direct contact with the Palestinian factions which it and Israel and others label as terrorist organizations, despite the fact that Hamas did win democratic elections here, despite the fact it is a part of the fabric of Palestinian politics that cannot be ignored or isolated or marginalized. They have focused on the Palestinian Authority in the West Bank. That hasn’t necessarily produced tangible results. There’s a lot of problems in terms of getting everyone on the same table.

He then continued on to say that the other issue is that the United States “has to be able to rein in Israel in terms of some of the actions it takes on the ground,” and that despite Israel being a recipient of American foreign aid dollars, “when it comes to expansion in the West Bank, it hasn’t stopped despite the fact that the U.S. opposes that policy.”

Mohyeldin concluded by reverting back to local sentiment, noting that people in that part of the world are asking: “How can the U.S., which gives so much money to Israel, not stop it from doing something against the U.S. interest, which is a two-state solution?”