No, Michelle Malkin Being Wrong About Michelle Obama Does Not Entitle You To Call Her A Prostitute 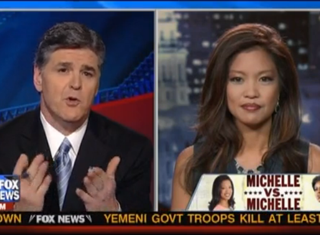 During a segment on Hannity last night, Michelle Malkin questioned the “lapdog media” on why it had not gone on the attack after First Lady Michelle Obama, and why they hadn’t dragged her into the presidential race. Given the outcry against Hilary Rosen for taking a swipe at Ann Romney, a direct attack on the First Lady (who is not an elected official) seemed unwise, and many were quick to say so.

But because this is the internet, those legitimate concerns quickly found themselves drowned out by a chorus of reprehensible sexist comments, from calling Malkin a “prostitute” to suggesting she take up a new career in pornography. The problem with this sort of blatant sexism and gross lack of fundamental human respect is an obvious one, but the practical implications for those trying to have a serious conversation about the future of our country often go untold: when a political commentator gets flooded with sexist remarks, she has little time left to confront legitimate criticisms of her work, and the one doing the criticizing often ends up lost in an avalanche of filth.

And there was much to talk about and criticize in Malkin’s original appearance, which generally brought up the question of why First Lady Michelle Obama was exempt from being attacked politically. Many reasons, and many of them brought up by Malkin herself with Rosen went after Ann Romney. There is nothing wrong with pointing out some holes in her current line of attack, and Malkin, by exposing herself as a public political figure, tacitly accepts that she will have to debate the merits of the points she makes on television. But Malkin hasn’t don’t enough of that lately, and it isn’t her fault whatsoever. What time does Malkin have to answer legitimate attacks on her work by myself and others when she has to deal with things like this?:

That sort of vicious bile isn’t unique to Twitter– among the comments I’ve had to delete on my own post were ones recommending Malkin “get back to doing her Asian porno videos,” comments fantasizing about her “lips,” and an out-of-the-blue insult about her being an “anchor baby” (?). And if not in its intensity and repulsiveness, these sort of comments stand out by their volume– they easily outnumber any political criticism of Malkin’s, or any other female commenters, points to begin with. The comments drive a vicious cycle: commenter says something worthy of challenging, but receives only sexist gripes in return; commenter replies only to those most reprehensible comments and legitimate challenges get swept under the rip tide of unproductive insults. The result is that the commenter feels only the hit of this rhetorical pollution hitting them, but those who want to dispute that person’s claims go ignored or, worse, lumped into the often-anonymous rabble.

Often the counterargument from those who participate in this sort of objectification is to blame the victim (though Malkin would be the last person to use the term for herself, nor do I mean to call her one)– to argue that, by being a woman in politics talking about politics and being either right or wrong, they were “asking for it.” “It” can be anything from being praised for their beauty with lewd references to the sex acts an anonymous Twitter user wants to see the person practice to the more comment cries of “fat!” and “ugly!” that litter the internet. Yes, there are individuals who actively seek out this sort of repulsive marginalization– who litter the internet with risque photos of their bodies only to prattle on about how their self-objectification has led to objectification from others who have no desire to engage what passes for a brain there. This phenomenon isn’t exclusive to women– who can forget the sexy Julian Assange pin-ups adorning Wikileaks when the “sex by surprise” story broke?– but it is a rare enough one that it need not pollute almost every conversation involving a woman in politics on the internet. It is rare enough that it does not constitute an affirmative defense for those who lurk in the darkest corners of the internet to prevent women in politics from participating in a healthy discussion.

Thankfully, most people in the public discourse rebuke this sort of ad hominem hyper-sexualization, because they realize that it denies individuals who are, above all else, human, the irrevocable respect one is born with a right to. It also ignores the fact that the people we see on television– yes, even the women– are more than talking heads on a screen. By all accounts, Malkin is a personable, kind, and passionate human being. She is also a human being and errs in her political strategy– all of which can be said of Chris Hayes or Krystal Ball or Laura Ingraham or Eric Bolling or any number of controversial media figures who think aloud for a living. A person’s politics have zero impact on whether they deserve fundamental human respect, and thankfully, a number of public figures (notably Kirsten Powers here) have a passion for making this point. But the practical implications for those who care to challenge people’s ideas are staggering, and the public discourse deserves as much of an outcry over being unable to engage in civil public conversation as it does as it does over the inherent depravity of the comments themselves.