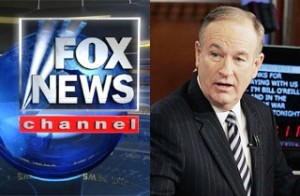 Bush narrowly beats John Kerry in 2004. Not surprisingly, Fox is still #1, and by a wider margin.

Mr. Obama decisively beats Mitt Romney four months ago; Regardless of which party holds executive power, Fox is still decimating the competition, albeit by a slightly smaller-than-usual margin. Sure, MSNBC’s Rachel Maddow and Lawrence O’Donnell are periodically beating Sean Hannity and Greta Van Susteren in the demo, but for 22 other hours out of the day, it’s not even a fair fight.

So why does this keep happening?

Why, for the better part of 12 years, can’t anyone seriously challenge Fox News?

The country IS becoming more socially progressive, whether it be gay rights, legal pot or its attitude toward illegal immigrants.

So why isn’t the country—of which 51.1 percent of its registered voters went for Mr. Obama last fall—moving away from a network that many of its critics call an extension of the Republican Party?

The answer played itself out again this week starting on Tuesday’s night O’Reilly Factor: Bill O’Reilly is speaking with his usual Tuesday night guests in the form of Monica Crowley (conservative) and Alan Colmes (liberal). This is a segment that has existed for years. Colmes is married to Crowley’s sister, bringing a Carville-Matalin element (sort of) to the show. The topic is sequester, who’s to blame, and particularly if the President has any inclination to ever cut anything given his record over his first 50 months in office.

Part I: O’Reilly claims that Mr. Obama has no inclination to reduce spending, wants Colmes to specifically list what the President is willing to eliminate.

Part II: Colmes claims that Mr. Obama has been receptive to Medicare and other entitlement cuts, but is speaking in general terms and therefore isn’t as specific as O’Reilly wants…

Part III: O’Reilly (clearly frustrated), calls Colmes a liar, and comes close to dropping an s-bomb on the air, characterizing Colmes’ argument is “bull-blank” and “jack”. The 63-year-old host proceeds to point his finger at his longtime co-worker no less than a half-dozen times, but later apologizes for calling Colmes a liar (while still maintaining he wasn’t being specific in terms of exact cuts).

But it doesn’t end there on Tuesday’s show: John Stossel, longtime ABC News reporter now Fox News libertarian, doesn’t stick with the original segment topic he was invited on The Factor to talk about. Instead, he tells O’Reilly to his face that he was “obnoxious” and “out of line.”

The next day, there is no memorandum from Roger Ailes or Bill Shine (Senior VP of Programming) stating that no one else at the network should talk about the incidents. Instead, the other opinion shows—knowing that they’ve got a hot story—use that freedom to run with it, give it legs.

The hosts of The Five predictably support O’Reilly in his argument that the President doesn’t have the ability or courage to cut spending. Juan Williams, filling in for the show’s lone liberal, Bob Beckel, gamely defends Colmes.

Three hours later, Kirsten Powers—the “female Colmes” who progressives loathe for actually having the audacity to occasionally go against the usual talking points of her party—confronts O’Reilly directly on his show, says he’s “100 percent wrong” in his argument against the President. She goes on to detail $400 billion in cuts toward federal healthcare spending Mr. Obama proposed, even tweeting out the PDF she used after the segment to drive home her point.

Remember, O’Reilly is the LeBron James at Fox News: He’s the network’s highest-paid, most influential, most revered player on the team. He’s authored multiple best-sellers, he’s host of a program that destroys everything in the ratings and has since 2001, and is such an influential personality that he receives regular guest invites on CBS, NBC, ABC, The View, Letterman and Leno.

Yet here’s Kirsten Powers, a liberal contributor, a fellow employee at Fox News who gets infinite crap on a daily basis from fellow liberals for sleeping with the enemy, telling him he’s full of it on his own program.

Let me answer a question with a question: Could you ever picture this scenario happening at MSNBC or CNN?

Rachel Maddow invites Michael Steele (former head of the RNC and current MSNBC contributor) on her program. They get into an argument over whatever, things get heated. Maddow calls Steele a liar, saying his perspective is complete BS.

Could you ever, EVER, see O’Donnell calling out Maddow for her treatment of Steele? How about The Cycle? Would S.E. Cupp rush to Steele’s defense while Touré mocked him while defending Maddow?

Would, say, Steve Schmidt (MSNBC contributor, former McCain campaign manager) come on Maddow’s show the next night and say to her face that she was totally out of line?

The answer, from what we’ve seen, is no. Sure, there is disagreement between guests, small-time players on the network…but not to this degree, not to this level of candor.
Hardball has its share of yelling (mainly from the host) but does that disagreement carry into other shows? Not on your life.

Note: This isn’t a moral argument based on good behavior or a better code of ethics. Rather, it is simply one that focuses on which network is more compelling in terms of its personalities and the manner by which they interact with each other.

And that’s why there’s Fox, and there’s everyone else. It is much like the dynamic of the Howard Stern Show: A mix of characters all willing to take on Howard and each other, and in the most honest of ways. There simply is no filter on Howard’s show, and the audience revels in being able to witness a family fight on an almost-daily basis. Most importantly, none of the fights are planned or scripted.

It just happens, just like it does in homes every day across the country. People can relate and therefore can appreciate what they’re hearing.

Lawrence O’Donnell sat in judgment of the O’Reilly-Colmes brawl just hours after it happened, mocking the former for losing his cool.

What O’Donnell doesn’t get, what his network will never understand, is that this is the kind of stuff that makes O’Reilly and Fox untouchable: They’re willing to attack each other based on their opinions and principles, all while his brethren at MSNBC wouldn’t dare call out its own in a similar situation.

Debate and strong opinions are what cable news is all about, even when those opinions are directed at those you may run into at the company cafeteria.

Fox News gets that.

Everyone else…well…just look at the numbers.