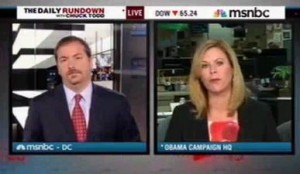 As the fallout from the Supreme Court‘s ruling on President Obama‘s Affordable Care Act enters its second week, the political media continue to be fascinated by the “Tastes great! Less filling!” debate over whether the individual mandate is a tax or a penalty. While Republican presidential candidate Mitt Romney has displayed his usual Kama Sutra-esque positional dexterity, Obama Deputy Campaign Manager Stephanie Cutter laid it all out for The Daily Rundown‘s Chuck Todd this morning.

In fairness to the media, this question has been gloriously kept alive by the Romney campaign, and the Republicans whose disingenuous message they undercut by declaring the mandate a penalty, before flipping on the issue yet again. Republicans tried to salvage some benefit from the ruling by claiming that the Obamacare mandate was some huge tax increase.

Cutter, true to her name, sliced right through the question. “This is a penalty administered through the tax code,” she replied, adding “It’s a penalty of less than 1% of the American public…”

“Does the nuance matter there?” Chuck asked, as Cutter plowed on.

Todd and Cutter went back and forth on the subject for awhile longer (Cutter’s unspinning of the media’s narrative on the ruling is particularly effective), but from a political standpoint, Mitt Romney and the Republicans would do well to stop the tape right here, and heed those words: it doesn’t matter what we’re calling this. They should also heed President Obama, who gave the GOP the best advice they’ve gotten, on the very day of the ruling: call it a game, and move on.

Whatever you think of the Obama campaign’s responses to this question, or what you think about health care reform, this issue will always be a net loser for Mitt Romney, so the longer the media talks about it, the worse it is for him. At best, Republicans might be able to convince some people that the mandate is a tax, but they’ll simultaneously be convincing them that Mitt Romney invented that tax.

At worst, though, they force Mitt Romney into reinforcing the already-deadly flip-flopper narrative, while also exposing the fact that their party, and their nominee, really have nothing to offer in Obamacare’s place. Really, they have less than nothing.

Chuck Todd is probably right, the Obama campaign’s position on the tax/penalty question is probably too nuanced for low-information swing voters, but it has the benefit of not making them look like clowns. Voters might tune out halfway through it, but they won’t point and laugh. Substantively, you can chuckle at the superficial contradiction (a friend told me this entire conversation reminded him of the old SNL “It’s not just a dessert topping or a floor wax, it’s both!” Shimmer Floor Wax sketch), but the distinction that the Obama campaign is drawing (however confusingly) is the same one Republicans are trying to obscure: the individual mandate (tax or penalty) is not a huge, broad-based tax increase.

Elsewhere in the interview, Cutter also talked about the President’s two-state bus tour, defended the campaign’s recent ads attacking Romney over outsourcing, and introduced the issue of President Obama’s action against Chinese tariffs on American automobiles.