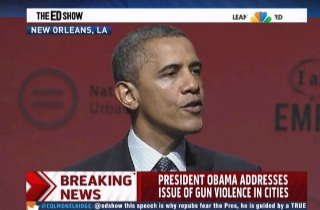 During his Wednesday speech before the Urban League in New Orleans, President Barack Obama discussed the Aurora, Colo., shooting spree, offering his condolences to the victims and their families and carefully articulating his views on gun control, which seemingly includes a renewed effort to ban assault rifles.

The president nodded to the post-Aurora outcry for stronger gun legislation, adding that “too often, those efforts are defeated by politics and by lobbying, and eventually by the pull of our collective attention elsewhere. But what I said in the wake of [the 2011 shooting spree in] Tucson was that we were going to stay on this persistently.”

President Obama then rattled off a few of what he considers his administration’s strongest accomplishments on the issue: “The background checks conducted on those looking to purchase firearms are now more thorough and more complete. Instead of just throwing more money at the problem of violence, the federal government is now in the trenches with communities and schools and law enforcement and faith-based institutions.”

“But even though we have taken these actions,” he continued, “they’re not enough. Other steps to reduce violence have been met with opposition in Congress.”

He then went on to articulate what seems to be an opposition to legal assault rifles: “I, like most Americans, believe that the Second Amendment guarantees an individual the right to bear arms. I think we recognize the traditions of gun ownership that passed on from generation to generation…. but I also believe that a lot of gun owners would agree that AK-47s belong in the hands of soldiers, not in the hands of criminals; that they belong on the battlefield of war, not on the streets of our cities.”

“I believe the majority of gun owners would agree we should do everything possible to prevent criminals and fugitives from purchasing weapons,” he continued, “and that we should check someone’s criminal record before they can check out a gun seller, that a mentally unbalanced individual should not be able to get his hands on a gun so easily.”

“These steps shouldn’t be controversial,” he concluded, “they should be commonsense.”