Olbermann: ‘Bill O’Reilly Is At Heart A Danger To The Safety To Elected Leaders’ 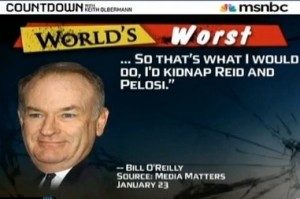 Humorous hyperbole or serious threats? That’s the crux of the most recent dust-up between prime time opinion-makers Keith Olbermann and Bill O’Reilly. During a Saturday night appearance during his “Bold & Fresh” tour, O’Reilly suggested that, if he were President Obama, he would have the CIA kidnap Harry Reid and Nancy Pelosi. Olbermann claimed the comment a “violence fantasy” and calling O’Reilly a danger to elected officials. Second verse, same as the first.

First some background. While on tour with Fox co-hort Glenn Beck, O’Reilly suggested that if he were Obama and needed to save the Democratic party, the first thing he would do is have the CIA kidnap Harry Reid and Nancy Pelosi. Do them no harm, but “maybe waterboard Nancy Pelosi.” The audience received these comments as though they were meant to be very funny – because there was much laughter in the room.

Olbermann referenced the sad story of Dr. George Tiller, who O’Reilly had dubbed “the baby killer” because he was alleged to provide numerous late term abortions. He was tragically murdered inside his Wichita church. At the time, Olbermann blame O’Reilly for inciting the violence against Tiller, and made parallels to O’Reilly’s comments from Saturday.

Text of his comments:

I know, every time I tell you about O’Reilly someone says oh its just posturing, your trying to get ratings, your obsessed with O’Reilly, you’re just a less version of him. And then you hear a tape like that, from an unguarded moment in an environment in which he thinks he is among friends, and he starts with the violence fantasies. Just like the “Tiller the Killer” drumbeat.

Bill O’Reilly is at heart a danger to the safety to elected leaders in this country. Ha, ha, ha, how funny it is to joke about kidnapping the speaker of the house and waterboarding her. He says it because he wants someone to do it.

So when I call him on it, I don’t care if fewer people watch this show as a result of it. This man is dangerous. Year in. Year out. He was dangerous to George Tiller, he is dangerous to Nancy Pelosi. And if you want to live in a country where people like Bill O’Reilly can encourage hatred and violence, just pretend that this is just a phony show biz feud. It isn’t.