O’Reilly To Panel On Trayvon Martin: ‘We Don’t Know Enough To Convict Anybody On TV’
video

O’Reilly To Panel On Trayvon Martin: ‘We Don’t Know Enough To Convict Anybody On TV’ 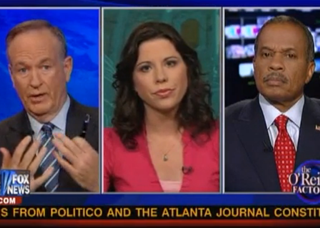 Bill O’Reilly has taken an extremely measured approach to the Trayvon Martin tragedy, and with the increasingly loud national outrage explored the case further today with Juan Williams and Mary Katharine Ham, who weighed in on the story and how the media and the President have reacted to it.

RELATED: Bernie Goldberg To O’Reilly: If Zimmerman Were Black, ‘We Wouldn’t Know The Name Trayvon Martin’

Williams was the first to react to O’Reilly’s “Talking Points Memo,” adding the information that Martin did not have a juvenile record and arguing that if Zimmerman “he acted recklessly, it should be accounted for in the court of law,” which should mean an arrest more likely than not. O’Reilly agreed except for the problem of probable cause given the “stand your ground” law in Florida. “Police would have to be very, very sure, because of the complicated law in Florida that if you feel in danger you can use deadly force,” O’Reilly replied, noting that if Zimmerman had a broken nose and looked bloodied, the police may be less likely to find probable cause for arrest. He commended the state for taking the case away from the town, which he called “exactly the right thing to do,” and concluded “we don’t know enough to convict anybody on television.”

Ham added that she saw “a lot of ifs about how they came to that determination” of there not being probable cause, but noted that the case had now become a “national conversation,” which meant it could be serving more as a “political litmus test” and did not lend itself to very level-headed debate. O’Reilly noted that at MSNBC, “[Zimmerman] has been convicted there,” and he didn’t add CNN to the list, but noted that this sort of media attack and threats “means Zimmerman can’t go outside the house.”

Williams pointed out that self-defense is still a hard sell given that “this kid had no weapon, Zimmerman had a weapon…. what you’ve got is a kid with Skittles and an iced tea.”

O’Reilly concluded asking whether the President reacting to the Martin story publicly was “a smart thing to do.” “He’s not generally good at talking about these things,” Ham argued, though Williams thought it was “smart politically” to show sympathy.