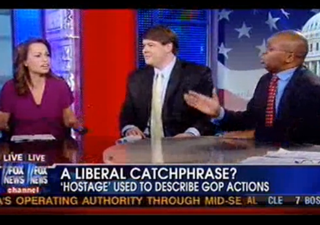 Who says 7 AM is too early for a cable news shoutfest? While you were either sleeping or getting ready for work this morning, Steve Doocy had a fiery political panel on his hands debating the relative merits and misdeeds of applying terms like “terrorists” and “hostages” to the Congressional debt debate– so fiery, in fact, that one panelist joked he felt like he was “being held hostage” by the squabble the other two panelists were having.

Doocy began the debate combatively, asking Democratic strategist Julie Roginsky why terms like “hostage” were being thrown around at all. “It’s so coordinated and obvious– is this the best you can do?” Roginsky thought it was a perfectly legitimate term to use in the current situation– especially since Senate Minority Leader called the economy “a hostage worth shooting”– but faced some strong disagreement from conservative radio host Ben Ferguson. “Can the President of the United States be held hostage by anyone?” he asked, which prompted Roginsky to respond that, yes, the Tea Party had done so with the economy, and the word was appropriate.

This sparked much crosstalk, with Ferguson complaining that it was not even possible for the Tea Party to hold one and a half branches of government hostage because “they have like barely any members in Congress!” while Roginsky argued that it already happened and the American people had seen it. At some point, panelist Robert George weighed in, joking, “I feel like I’m being held hostage by these two!” While he eventually got to note that “when you’re barely a month from the 10th anniversary of 9/11, it actually use the word ‘terrorist'” was unwise, his two co-panelists kept most of the debate to themselves, which Ferguson tried to shift to the subject of health care reform.

“Well… that was peppy,” quipped Doocy at the end of the debate. The panel reached no consensus on the matter, but certainly made for a lively debate.