Rachel Maddow: Romney Is Trying To Win By ‘Deliberately Running Against Minority Voters’ 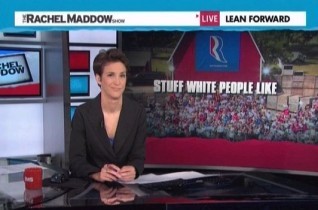 On her MSNBC show Monday evening, Rachel Maddow made the case that the Republican Party is attempting to win the 2012 election by “deliberately running against minority voters.”

Maddow explained that given his unpopularity with Latinos and blacks, Mitt Romney needs to obtain 61-percent of the white vote in order to win the election. She claimed that Romney seems to be trying for that large percentage of the white vote through several racially-tinged campaign messages.

“The Romney campaign is running ads about welfare,” she explained, “ads that are blatantly racially-charged charges, showing images of hardworking white people, telling them their black president is going to start handing out welfare checks to people who won’t even look for a job.”

Maddow also cited Romney’s defense of his seemingly debunked claims that Obama has tried to end the welfare work requirements, in which the former Massachusetts Governor accused the president of taking that action in order to shore up his base. “As if people on welfare are Barack Obama’s base,” she said with a wink. “Especially the lazy ones.”

Maddow continued to explain that the “welfare queen” strategy of the Romney campaign will surely continue as the “big media guy at the main pro-Romney Super PAC is the man who produced one of the most racist television ads in history, the infamous Willie Horton ad.”

“Maybe they can win with nobody else supporting them,” she concluded. “Which means we’re about to find out if you can win a presidential election in this country, in this year 2012, by deliberately running against minority voters.”