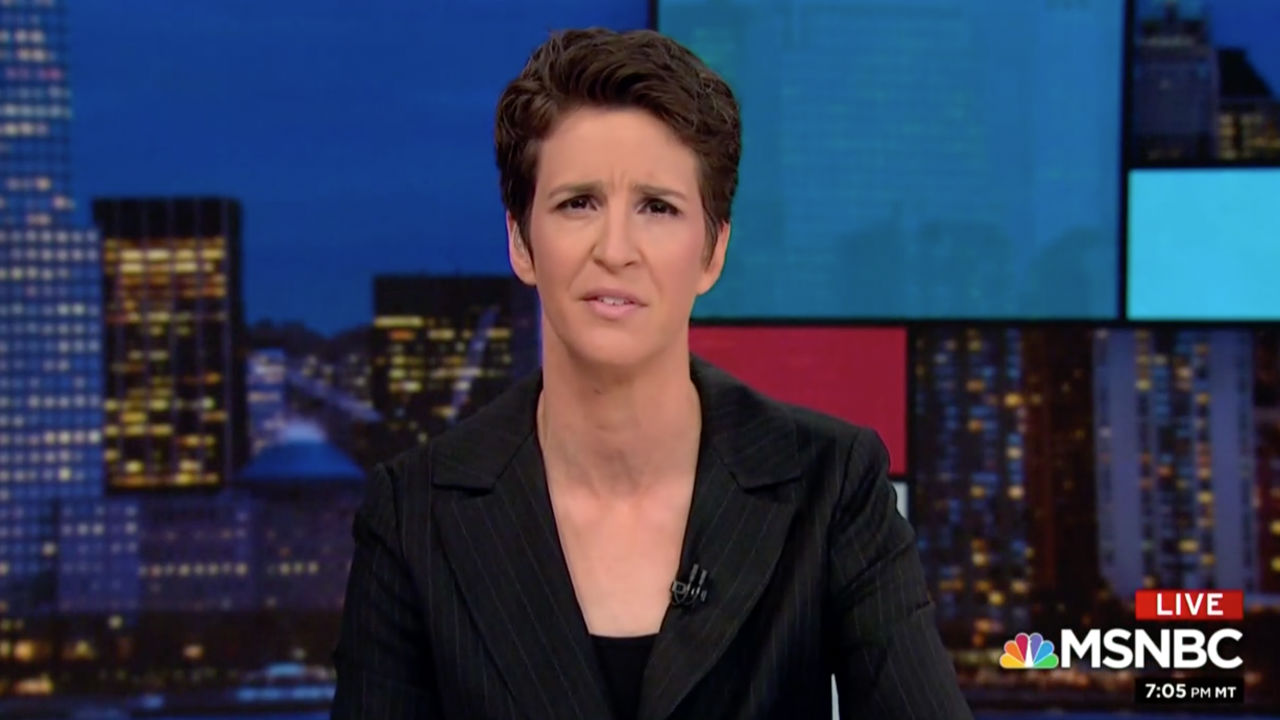 Question: What is missing from the below The Rachel Maddow Show clip, which aired on Thursday, Jan. 31?

Rachel Maddow, like many of her guests, has been very suspicious about who Donald Trump Jr. called both before and after his infamous Trump Tower meeting with Russians in 2016. Among the calls he made, several were to a blocked number. Maddow wondered on her show whether that blocked number was his father’s. She wondered hard, breathlessly. Rife with implication did she wonder, and heavily hanging the implied conclusion of collusion upon it.

It wasn’t just Maddow and MSNBC asking the question, of course. It was Rep. Adam Schiff (D-CA) of the House Intelligence Committee, and Rep. Joaquin Castro (D-TX). It was Rep. Eric Swalwell (D-CA) and Rep. Jackie Speier (D-CA). It was a lot of other members of the press, politicians, and commentators who wondered if the blocked number called belonged to President Trump, and would therefore tie him very directly to the meeting.

Junior said that he couldn’t remember who he called. Schiff made that a centerpiece of his cable news platform. “I believe it was probably the president,” said Speier. The call was a major point, and one the Judiciary Committee Democrats issued press releases about, and Rachel Maddow reported weightily.

But the assumption turned out not to be the case. It happens. Last week it was reported by nearly every credible, reputable media source that in fact the blocked calls were to business contacts of Trump Jr., and not to his father. The press reported on the story heavily, and the president and his son tweeted about it. It was big news.

But not hot enough for details on Rachel Maddow’s show. And before even considering that perhaps there was more pressing news, understand that she not only did talk about the calls, she talked about them with the man who has made the most of them: Adam Schiff.

She addressed the topic of the calls directly.

“This is not MSNBC reporting and MSNBC hasn’t confirmed this, but they’re saying Senate investigators have obtained information about something that you have asked about in the past concerning Donald Trump Jr.,” began Maddow promisingly.

“In the lead up to the 2016 Trump Tower meeting during the campaign, he had made a couple of calls to blocked numbers. And you had suggested that that was one of the things that was important for your committee to figure out, whether those blocked numbers might have indicated — or might have been an indication that Mr. Trump Jr. was actually calling his father, potentially talking to Donald Trump the candidate about that Trump Tower meeting with all those Russians,” she continued even more promisingly. This would be the natural place to state what the big news was, what the reporting said. But instead…

“What do you make of this new reporting,” she said, without saying what that reporting was, “and what do you think about the importance of that incident now, overall?”

In his rambling response, Schiff not only didn’t indicate the reporting that it was not a father-son phone call, he implied that the open question remains to be investigated. He also gave himself a new topic area for future cable news hits by saying “those conversations could have taken place over the phone or they could have taken place by Don Jr. walking down the hall to talk to dad.”

Watch the rest of the clip. At no point does Maddow tell viewers what the “new reporting” actually was. Maddow says “this is not MSNBC’s reporting”, but she doesn’t whose reporting it is. For the record, it was CNN. And ABC News. And the New York Times.

All those reports were published on Thursday. CNN broke the news, ABC broke the names, and other outlets including NYT confirmed on their own.

Maddow has intoned on the calls before, and Democrat politicians on her show have flogged it. Speculation doesn’t always pan out, and offering speculation is part of the job description for a political commentator. But after all of the importance and drama that danced on the head of the phone call pin, it would seem a correction or even an update would be a demand of journalism.

Yet, given the chance to tell her viewers not only that Senate investigators have evidence it was not a call to his father, that major media were reporting this that very day, or even the names of the people who were actually called (itself an interesting Russian lead), Maddow instead chose to gloss over it and let Schiff continue to beat his well-worn drum.

Even for an opinion show, that goes past shoddy and approaches deceptive.