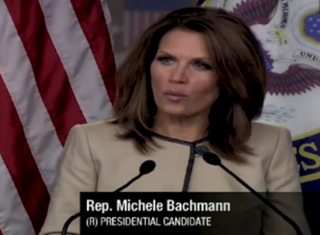 Just as she did after this year’s State of the Union address, Rep. Michele Bachmann delivered an unofficial response to the President’s jobs speech in front of Congress last night– and this time at least looked at the camera. In a short but rhetorically powerful statement, Rep. Bachmann expressed exasperation with the President for exhausting “one of the most sacred political forums” to deliver a plan that has “been tried and failed before.”

It was a short rebuttal– thought not the shortest of the night— seeking only to highlight the ideological differences between the President and the current Republican candidates. “Unfortunately” was the first word of her response, followed by the claim that the President’s policies “have cost the American people both jobs and prosperity.”

Rep. Bachmann took a swipe at the joint session idea, calling it “one of the most sacred political forums”– which begs the question why she and several other Republicans barely attended— but mostly stuck to the policy, arguing that “even if the President’s plan passes, we already know it will fail in practice,” as it proposes nothing new. “Our patience for speeches, gimmicks, and excuses has run out,” she declared emphatically.

Rep. Bachmann’s statements concluded that the President was “politically paralyzed” but, more importantly rhetorically, “philosophically incapable of doing what needs to be done.” That last line drives home Rep. Bachmann’s strategy: she’s not going for any swing votes, but hoping to get out the vote among her base in strong enough numbers to dilute the independent vote that will likely be evenly divided among several candidates.

Rep. Bachmann’s remarks via CNN below: