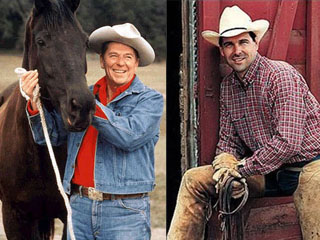 Texas governor Rick Perry has finally tossed his ten gallon hat into the presidential ring, and his campaign has gotten plenty of tongues wagging over whether America is ready for another George W. Bush. Many of those already making the comparison will see much of the 43rd President in Perry’s new ad, but the dark clouds over America, billowing Midwestern fields and cowboy imagery is a lot more Ronald Reagan than pre-presidential Bush.

For those with shorter-term memories, President Bush will be remembered for the Texan swagger he exhibited in office and subsequently upon leaving– a cowboy roughness to him that his 2000 ads went well out of their way to belie (much of the 2004 Bush oeuvre was dedicated to attacking, such as the brilliant “Windsurfing” ad rather than promoting). Take, for instance, this ad from 2000, where then-Governor Bush is presented plainly, wearing a suit, in front of a white screen, promising to make “preserving Social Security and Medicare” his top priorities:

The George W. Bush elected to office went out of his way to professional rather than folksy, a strategy the Perry campaign seems to have no interest in indulging (and let’s not even get into Perry’s views on Social Security and Medicare). The images in Perry’s ad depicting him in a suit are those in which it would be inevitable to wear one– say, his inauguration as governor– instead opting to place him in casual, outdoors situations when possible. He is actively emulating the part of George W. Bush the latter tried to hide from voters when he first ran, which is as much a statement about Perry’s cultural boldness as it is on the evolution of the American right under the Obama administration. But beyond the obvious appeal to an America that, by most polling standards, feels largely ignored by Washington, the ads are a clear nod to the man most Republicans are looking to find once more: Ronald Reagan.

The new Perry ad emulates in sequence, tone, and imagery at least two Ronald Reagan ads, one from his 1980 run and one from 1984. Beginning with a gray, dismal picture of America in the hands of Democrats, Perry pans from a graying Wall Street to a brightly dawning Middle Americans prairie, to nods to his rural Texan upbringing, to construction sites and gratuitous cowboy hats. Replace the jobs crisis with a foreign policy mess, an incumbent governor with an incumbent President, and tort reform with space travel, and you’ve essentially got “Foreign Policy,” Reagan’s 1984 ad:

The thematic deviations are inescapable, as are the near-three decades of history that divide the ads. But the aesthetic– the union of a negative and positive ad into one package, the increased color saturation as the ad turns to the future and not the past, the focus on the working class and outdoorsy lifestyle are clearly intending to look back to days that many in Perry’s potential voter base remember fondly as well as contrast the warm, heartland element to Perry with what these voters would interpret as a cold, distant coastal elite feel to President Obama. This explains the notable lack of Statue of Liberty shots in Perry’s ad– the only truly ignored Reaganesque meme in Perry’s debut piece. Sometime after 9/11 but before the creation of the Tea Party in its current, non-Ron Paul manifestation, New York stopped being part of “Real America,” instead looming as a beacon of alien liberal ideology much in the way San Francisco has been portrayed for much longer.

That Perry had to adapt that particular bit of millennial cultural evolution to his advertisement does not make it any less Reagan, however, nor any more Bush. In the pre-Obama era, Governor Bush knew that highlighting his Ivy League chops and talking issues, not feelings, were the keys to looking and sounding “presidential.” For Perry, they are the keys to looking like a RINO, with only those that truly capture the essence of Reagan™ standing a chance– meaning we should be poised to expect more “morning again in America,” strength through ruggedness rhetoric out of Perry in the months to come.