Romney Surrogate Blasts Chris Matthews: ‘You Guys Have An Agenda’ 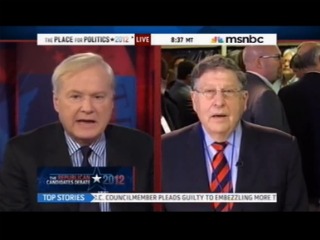 Former New Hampshire governor John Sununu, acting as a surrogate for Mitt Romney, had some choice words for MSNBC’s Chris Matthews when asked whether candidates should be held responsible for ads “put on the air by their former staffers and friends in their interest.”

“Look,” he weighed in, “you guys are reveling and wallowing in [a] ridiculous perception of what’s going on. There’s a law out there that defines what can and can’t be done by those PACs, and all the candidates are following the law. And to suggest that Governor Romney shouldn’t know what’s in that ad, with all the clippings that have been out describing it. Come on! Stop being ridiculous and get to the point.”

“Stop being ridiculous,” he reiterated after informing Matthews and his panel that they don’t know much about New Hampshire politics, “and talk about the issues!”

RELATED: Gingrich Goes After Romney For Attack Ads: ‘It Is Your Millionaire Friends Giving To The PAC’

“Repeating the word ‘ridiculous’ doesn’t make it so,” Matthews shot back, adding that, when in Iowa, he couldn’t seem to get away from Romney’s ads, “saturating with negativity.” He then reiterated his question: Is the candidate responsible for the content of such ads?

“He’s not responsible!” Sununu repeated. “Do you know what the law is?”

“I know what the law is,” said Matthews. “I’m talking about how laws can be used.”

Sununu seemed, in the parlance of today’s youth, to be over it. “You guys have an agenda that you wanna drive,” he said, “and you have no idea what the rules and regulations are and the fact that all these candidates are following them.”

When asked why Romney said he hasn’t seen the ads in question when he “obviously had,” Sununu said he’s clips of the ads before advising the panel to not “be silly.”

Have a look at their shouting match (and more tempered discussion that followed), via MSNBC: