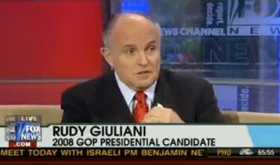 Forgotten former New York mayor and failed non-candidate to almost every possible public office in New York State Rudy Giuliani, KBE appeared on Fox and Friends this morning to analyze the passing of the Democrats’ health care bill. For what it’s worth, he thinks the bill will be, at the very least, a “disaster for New York.” Also, what is up with all these terrorists living such great lives in Gitmo, and other concerns from 2003.

Giuliani explains that he sees the bill’s success as “ideology trumping good sense” and explains that New York will have to carry an unenviable share of the cost burden for it. More worrisome, however, is his claim that “this is not health care reform. This is a Democratic ideological commitment to moving towards socialized medicine.”

Never mind the chyron reading “2008 presidential candidate”– by far the lowlight of a career that featured seven of the most restorative years in New York City history– Giuliani is a successful public servant. What he’s not is a policy wonk, especially about issues like medical care that mostly deal with helping the disadvantaged. His views on health care sound half-heartedly memorized from a Fox News primetime talking points compilation.

It didn’t take long for Brian Kilmeade to help Giuliani slowly transition back to his bread and butter: the benefits of torturing war criminals. Giuliani described the treatment of terrorists arrested overseas as “unusually good” by Attorney General Eric Holder (whose relation to the story was his attendance at the health care bill signing) and explainined why terrorists are not criminals. “The rules of domestic criminal justice do not apply to people we capture in the course of a war,” he explains, because there are “ways that you get information” that are not necessary to employ in regular criminal situation. The conversation was an experiment in surprisingly dated early-aughts rhetoric. No wonder Ron Paul is still ranting about the neo-conservative threat: he must have been watching this show.

Take the trip back in time with Giuliani and Kilmeade below: