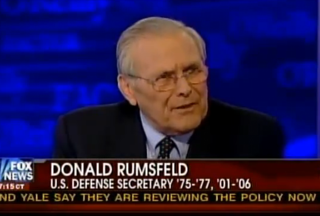 Afghan President Hamid Karzai just got some high-profile support from an unlikely source: former Secretary of Defense Donald Rumsfeld. The latter, visiting Bill O’Reilly to promote his controversial new memoirs, insisted to the host that he fully supported Karzai and found “no indication” that the Afghan leader was corrupt. He also cited the latest national elections as proof of Karzai’s legitimacy over O’Reilly’s claims that they were “rigged.”

Asked to evaluate the situation in Afghanistan, Rumsfeld began by noting that he had “a lot of confidence in [Gen. David] Petraeus,” but that, ultimately, Afghanistan would have to “nation-build itself.” To that end, he expressed satisfaction with the current government and decried “corruption baloney” surrounding Karzai’s administration, arguing that criticism of the regime was “misplaced.” In response to his optimism, O’Reilly countered that many in the political realm were not equally convinced that Karzai was trustworthy, or Afghanistan salvageable. “Everybody says that it’s too corrupt, too backward,” O’Reilly noted, but Rumsfeld wasn’t buying it.

“How many Congressmen have been sentenced?” Rumsfeld responded, arguing that nearly every nation on earth had some level of corruption, and that finding some “gambling in the casino” was not worth the widespread concern about the nation. Besides, he continued, Karzai won his election fair and square. Except O’Reilly didn’t quite agree, and countered that the election was “rigged.” “There is no indication that Karzai is corrupt,” Rumsfeld noted, continuing to press the point that “there was an election” and, additionally, that “he is the president of that country– we want him to succeed.” Finally finding a point on which to converge, O’Reilly ceded that Karzai’s uncontested rule in the region at the expense of the Taliban would be universally beneficial.