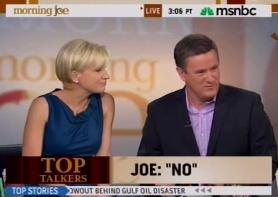 In the wake of today’s report by Howard Fineman on The Huffington Post about the possibility of a Michael Bloomberg–Joe Scarborough 2012 ticket, the Morning Joe host spent a significant amount of time shooting down the rumors this morning.

But he also took some veiled shots at the author, and his MSNBC colleague, Fineman.

His co-host, Mika Brzezinski, stated her case early in the segment. “You had the Times calling you. I told you not to talk,” she told Scarborough. “Because there’s nothing to say. What’s wrong with you?”

Here’s the section in question in Fineman’s report:

In an interview, Scarborough, a former GOP congressman from Florida, issued a firm yet carefully-worded denial. “We haven’t discussed it directly,” he said, adding, “Have people discussed it in his sphere and in my sphere? I think so.”

According to Scarborough, the conversation started with him calling Fineman back, the new Huffington Post writer stating what he had heard and Scarborough immediately saying, “No. No, it’s not gonna happen.” But he kept talking, and the quote is what came much later in the conversation. So this morning, Scarborough clarified: “Mike Bloomberg and I have not talked about this directly, or indirectly or super super secretive directly.”

Donny Deutsch took pleasure in continuing the conversation: “You and Bloomberg as a ticket would be brilliant. I’m just saying as a marketer!”

Well – where does this come from Joe? This story isn’t over yet, especially as 2012 rumors will continue swirling for the next year or so…

Here’s the segment this morning: