Sean Duffy Defends His Comment About Lt. Col. Vindman Having ‘Affinity for Ukraine’: I ‘Wasn’t Trying to Undermine His Service’ 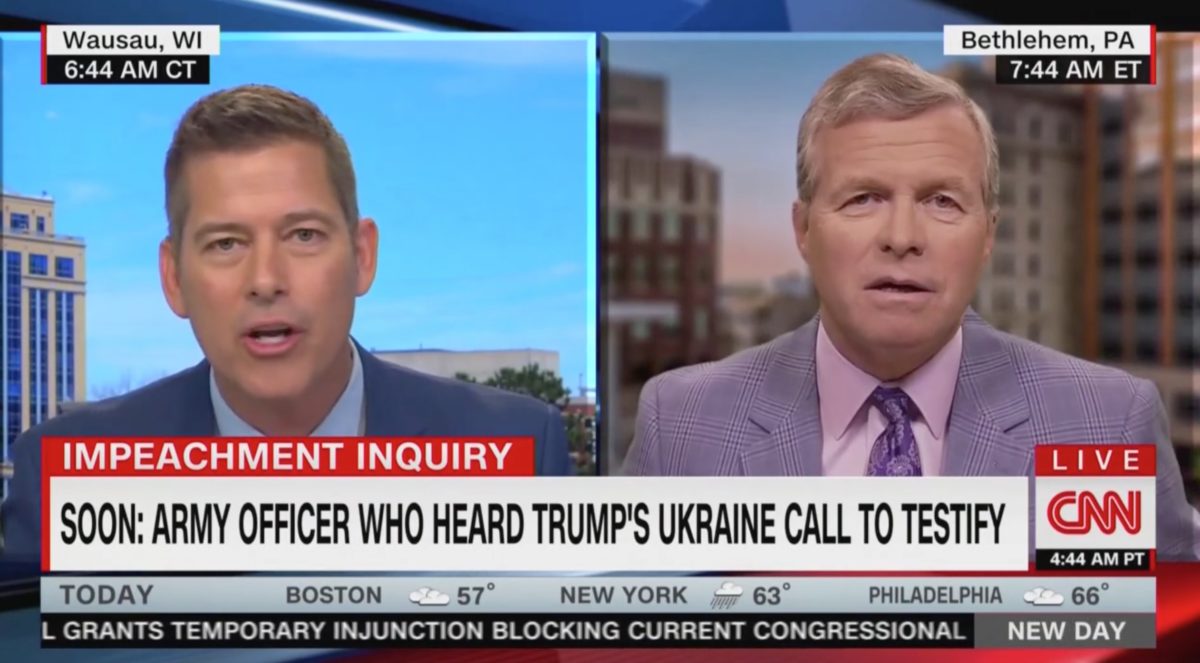 Former Rep. Sean Duffy continues to make a splash in his new role as CNN contributor.  At issue in this particular episode is Lt. Col. Alexander Vindman, whose testimony before House Intel committee for an impeachment inquiry, and just so happens to have been born in Ukraine.

Is one’s place of birth relevant info for a decorated war hero? Or is it designed to undermine his authority before the body politic, as John Yoo did in a widely derided appearance during a Monday evening on Fox News when he suggesting “espionage” by the part of Lt. Col. Vindman.

Vindman, a military officer and Ukraine expert on the White House National Security Council, is reportedly telling the House Intel committee conducting the impeachment inquiry of President Donald Trump that he was alarmed by Trump’s phone call with Ukrainian President Volodymyr Zelensky.

Duffy noted Vindman’s Ukrainian-American status in a spirited discussion with fellow former GOP Rep. Charlie Dent and New Day anchor John Berman, particularly when the CNN anchor asked Duffy to explain why he brought up the fact that Vindman is a Ukrainian immigrant.

Berman: “Do you trust Ambassador Bill Taylor more because he was born in the United States? Where does the location of his birth matter? Mark Meadows was born in France, is he pro-French by definition? That’s a pretty stunning comment you made just there, and it’s remarkable and notable given that Laura Ingraham last night in her apparent talking points brought it up as well.”

Duffy: “It seems very clear that he is incredibly concerned about Ukrainian defense. I don’t know that he’s concerned about American policy, but his main mission was to make sure that the Ukraine got those weapons. I understand that. We all have an affinity to our homeland where we came from. Like me, I’m sure that Vindman has the same affinity or like Mark Meadows.”

Berman: “Are you suggesting that you would put Irish defense over U.S. Defense? Is that what you’re saying?”

Duffy: “So are we saying that by giving this money to the Ukraine that absolutely is the money that’s going to secure American national defense against Russia? I don’t believe that. And so he’s entitled to his opinion. He has an affinity I think for the Ukraine. He speaks Ukrainian, and he came from the country and he wants to make sure they’re safe and free.”

Twitter lit up by dragging Duffy’s “reprehensible” “smear” of Lt. Col. Vindman, so Mediaite reached out to the former Congressman for comment.

Asked if it was a fair critique that Duffy was undermining this war hero’s service, Duffy said: “I do think that is unfair.”

“If you listen to the segment, I wasn’t trying to undermine his service or his war hero status, what I was trying to say is, he gives advice, the president sets the policy and he can disagree with the president especially on Ukraine,” Duffy explained. He then added “but he wasn’t elected, the president was.”

Duffy’s “affinity for Ukraine,” is similar to comments made by Fox & Friends co-host Brian Kilmeade, who said that Vindman was “simpatico with Ukraine.” Mediaite spoke with Duffy Tuesday morning and noted the coincidental commentary between the former Wisconsin Congressman and the Fox & Friends host, and asked if it was part of some broader talking points.

Duffy pushed back saying “no I went to bed last night and just sort of heard about the transcript being released, and I actually read it this morning. I don’t know when Kilmeade said that.”

“We wanted to come back and talk about that if you listen to the first part of what I was saying, it was nothing about undermining his status as a Lt. Colonel, or his war status or his fighting for our country, that’s not at all what I said,” Duffy further explained.