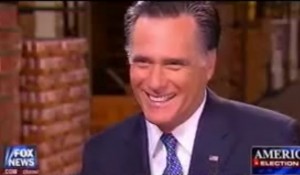 There were quite a few tense moments during Bret Baier‘s great Fox News interview with former Massachusetts Gov. Mitt Romney Tuesday night, especially when the subject turned to the individual health insurance mandate that Romney signed into law as Governor, but which he now opposes at a national level. When Baier pressed Romney, the cracks showed a little bit, as the candidate said, with an exasperated laugh, “This is a very unusual interview.”

Baier began by referencing Romney’s book, which had a line about the health care mandate (“We can accomplish the same thing for everyone in the country.”) removed in its paperback version, and Romney’s insistence that his Romneycare law is not the same as Obamacare.

“Do you still support the idea of a mandate? Do you believe that that was the right thing for Massachusetts? Do you think a mandate, mandating people to buy insurance is the right tool?” Baier asked.

A clearly frustrated Romney replied, with a strained laugh, “Bret, I don’t know how many hundred times I’ve said this, too — this is an unusual interview. All right, let’s do it again.”

Romney reminded Baier of all the times he has said that his plan was only a good idea at the state level, at which point Baier, to his credit, reminded the candidate of what that other Romney guy has been saying. “Governor, you did say, on camera and other places, that at times you thought it would be a model for the nation.”

Perhaps a bit rattled, Romney urged Baier to continue to “read the tape,” insisting that his position on the individual mandate has always been “for each state to be able to look at it.”

Unfortunately, Baier didn’t produce any tape for Romney to “read,” but we’ve got some that might have come in handy last night. In a 2009 Meet The Press appearance, Romney endorsed the Healthy Americans Act, also known as the Wyden-Bennett bill, which would have “establish(ed) Healthy Americans Private Insurance Plans (HAPIs) and require those who do not already have health insurance coverage, and who do not oppose health insurance on religious grounds, to enroll themselves and their children in a HAPI.”

Here’s what Romney said then: (emphasis mine, h/t Ezra Klein)

…the right way to proceed is to reform health care. That we can do, as we did it in Massachusetts, as Wyden-Bennett is proposing doing it at the national level. We can do it for the nation, we can get everybody insured, we can get the cost of health care down, but we don’t have to have government insurance and government running health care to get that done.

As sorry as I feel for the Romney Dangerfield of the Republican field, I feel even worse for the voters he can’t seem to get no respect from. How is it that a group of people who hate Obamacare so much have now ended up having to choose between the Wright Brothers of the individual mandate? In case you missed it, Romney made it fly, but he credits Newt Gingrich for the blueprints.