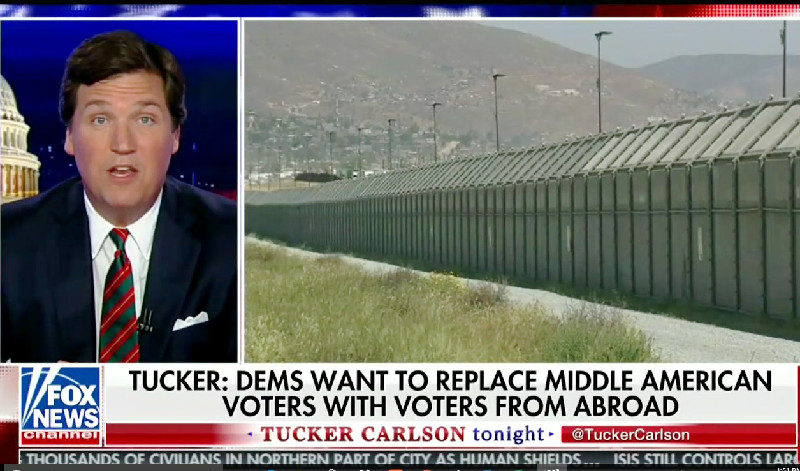 With Wednesday night’s broadcast of Tucker Carlson Tonight, Fox News’ Tucker Carlson seemingly decided to stop beating around the bush, said “screw it,” and came out to his audience as basically a full-fledged white nationalist. And it’s doubtful he’ll be putting that genie back in the bottle anytime soon.

Embracing former President Bill Clinton’s ‘90s stance on illegal immigration, Carlson claimed that the Democratic Party “has morphed into something that bears no resemblance to what it was even ten years ago.” He added that for decades the Dems were a coalition of Liberal intellectuals, the urban poor and the country’s working class.” According to Tucker, they lost that last group, which was the only thing that kept them “grounded in the vicinity of reality.” Meaning, essentially, that the party was nothing more than poor minorities and the so-called liberal elite.

Tucker went on to target black House members Keith Ellison and Maxine Waters for their rhetoric related to DACA and the alt-right, wondering aloud when Democrats started “talking like this” while claiming that it represented a “war cry.” Furthermore, he asked where the “adults” in the party were, noting that House Minority Leader Nancy Pelosi was now leading a party that was determined to “destroy” it, highlighting her praise for DREAMers as “perverse.”

So, just to recap, in one four-minute essay, Tucker called the Democratic Party an existentially destructive party hell-bent on gaining power by using foreign hordes to collectively re-shape this country, and that this change began under a black president and is becoming more extreme due to the actions of other blacks. If you feel that I’m cherry-picking, feel free to watch the whole thing right here:

But it didn’t just stop there Wednesday night. Following his opener, Carlson brought on a Democratic strategist, Michael Starr Hopkins, to beat up on for a while, as is his wont. As he kept trying to get Hopkins to refute Waters’ comments about the KKK and alt-right being in the Trump administration, Hopkins retorted that Steve Bannon and Seb Gorka were in the White House and are known allies of the alt-right. We then got this exchange:

HOPKINS: Maxine Waters’ comment about the Ku Klux Klan and “alt-right” being in the White House, I think that’s actually a legitimate conversation that we should be having, because Donald Trump has surrounded himself with people who, I think, Democrats should be scared of, I think Republicans should be scared of, people who have tendencies to not only cite Breitbart and alt-right literature but also echo some of the tones.

And Tucker wasn’t done talking down to minority guests. Discussing the recent story of young St. Louis-area kids kneeling down during the national anthem in response to protests, Carlson let former NFL player Freddie Mitchell know that he understood the struggles and experiences of black people. How so? Because he’s “an American.”

This isn’t necessarily a brand new development for Carlson, a host who has received criticism for overly racializing his conservative punditry in the past. Last month, while spending quite a bit of airtime on Colin Kaepernick and NFL players kneeling during the national anthem, Carlson argued that league owners couldn’t be racist because 70% of the players were black, all while stating the players were going out of their way to show how much they hate America.

And let’s not forget how he followed President Donald Trump’s example of using a false moral equivalency in the wake of Charlottesville, but going even further than Trump’s “both sides.” In an attempt to normalize the president’s response, Tucker noted that slavery has existed for most of history and that many great men were slave owners. He also directly equated white supremacy with those protesting white supremacists. And back in May, he got really upset with a guest for highlighting at the time that only white conservative men were working on the health care bill, telling the guest to “stop pushing this race stuff.”

Look, it isn’t a secret that white supremacists appreciate Tucker Carlson. Back in July, Vox’s Carlos Maza highlighted how racists and well-known white nationalists expressed their love for Tucker while noting the way Carlson reported on certain racial, social and immigration issues. At that time, Maza pointed out that the conservative commentator utilized various techniques and tactics to create a veneer of respectability when it came to his highly volatile messaging.

The thing is, Tucker is also really smart and has long been able to couch his views on immigration and refugees as being based on his concerns towards national security, economic stability, and crime. And moving forward, just as he’s done in the past, he’ll continue to list those concerns as the main reasons he wants to limit all immigration etc.

But, Wednesday night, it felt like Carlson ran out of shits to give, and just laid it pretty bare for the world to see.