Why Is CNN Obligated To Read Ted Cruz Campaign’s Lies On Air? 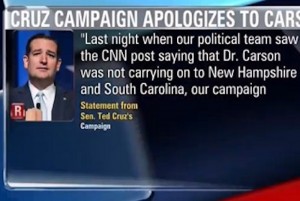 In an election season full of bizarre spectacles, perhaps none was quite so bizarre as that of CNN’s Ashleigh Banfield reading a prepared “apology” from the Ted Cruz campaign over “dirty tricks” (to put it generously) that Cruz’s campaign and surrogates used to carry him to victory over Donald Trump in Monday’s Iowa caucuses. It’s not bizarre that Cruz’s campaign would issue a self-serving and inaccurate “apology,” but it is bizarre that CNN would broadcast such an apology when it contained willful inaccuracies about CNN.

Aside from the legally-shady “voter violation” mailer, Cruz’s campaign has been accused of spreading rumors at caucus precincts that Ben Carson was dropping out of the race, and that Iowa voters should instead support Ted Cruz. That allegation came from none other than Ben Carson himself Tuesday morning, when he told Fox and Friends that his own wife, Candy Carson, personally witnessed this activity going on:

#iacaucus Skipping NH & SC is the equivalent of suspending. Too bad this information won’t get to all caucus goers. https://t.co/lW5Js50EMA

Now, CNN reporter Chris Moody never said Ben Carson was “skipping” South Carolina and New Hampshire, just that he was not going directly there after Iowa, but if King had any doubts about Moody’s meaning, they should have been cleared up by the tweet he posted mere seconds later, and a good 40 minutes before King started his rumor:

Carson won’t go to NH/SC, but instead will head home to Florida for some R&R. He’ll be in DC Thursday for the National Prayer Breakfast.

Ben Carson’s campaign tells me he plans to stay in the race beyond Iowa no matter what the results are tonight.

The news was also reported on-air by Jake Tapper, who made it clear this news was only about Carson’s schedule for the middle of this week:

Then, this afternoon, Cruz’s campaign released an apology to CNN, which Ashleigh Banfield read on the air even as she noted that it was utter crap:

“Last night when our political team saw the CNN post saying Dr. Carson was not carrying on to New Hampshire and South Carolina,” PS, we didn’t say that, we didn’t say he wasn’t going to South Carolina, but this is the statement that we’re getting, “our campaign updated the grassroots leaders just as we would with any breaking news story. That’s fair game.”

“What the team should have done is send around the follow-up statement from the Carson campaign clarifying that he was indeed staying in the race when that came out.”

The statement goes on to say that “This was a mistake from our end, and for that I apologize to Dr. Carson.”

To be clear, CNN never reported anything remotely like Ben Carson skipping primaries or dropping out, so the first part of the statement is a lie, and the update about Carson staying in was posted at the exact same time as the thing they blamed the rumor on, 40 minutes before King started the rumor. Steve King is now trying to blame this on Jake Tapper, who also didn’t report Carson dropping out, and is not the one to be messed with.

But, to paraphrase Ted Cruz, I get that politicians will do whatever it takes to get elected, and when they’re caught doing something underhanded they’ll try to wiggle their way out of it, but I don’t understand why CNN would allow itself to become the vessel of their deception, even if they tried to tell the truth in the process. As a journalist, you have choices, and CNN could have demanded an accurate statement from Cruz’s campaign, or sent them packing to someone else, correcting it if someone else was roped into publishing it.

Banfield is right, it was pretty amazing, but not in a good way. CNN should have had more respect for its reporters than to allow them to be smeared on their own air, exclusive and hot off the presses.