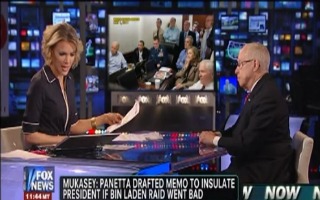 Fox News host Megyn Kelly hosted former Bush administration Attorney General Michael Mukasey on Tuesday to discuss a recently released Central Intelligence Agency memo that identified an admiral in command of the 2011 raid on Osama bin Laden’s compound in Pakistan. Some have interpreted the memo as being intended to shift blame from President Barack Obama in the event that the raid resulted in failure. Mukasey said that “I’ve never seen or heard of anything like it.” He compared Obama’s message to Americans on the night of bin Laden’s death to those of past U.S. wartime commanders and concluded “big difference.”

Kelly said that a memo, composed by Defense Sec. Leon Panetta, identified the White House’s strategy if the bin Laden raid ended in failure. Kelly said that the memo identifies Navy Adm. William McRaven, the commander in charge of the raid, as the individual who would take the blame.

Kelly read a portion of the CIA memo:

The timing, operational decision making and control are in Admiral McRaven’s hands. The approval is provided on the risk profile presented to the President. Any additional risks are to be brought back to the president for his consideration. The direction is to go in and get bin Laden and if he is not there, to get out.

When asked for his initial opinion on the letter, Mukasey said “I’ve never seen or heard of anything like it.”

He says the memo does not reference the precise risk profile of the mission in question, but does not cite the document which contained the risk profile in question. Kelly and Mukasey agreed that any “additional risk” which should have been referred to the president would have been impossible to convey as the speedy operation was unfolding.

After a pause, Mukasey said of the memo “it’s bizarre.”

“It’s not the sort of thing that crops up in a vacuum,” said Mukasey. “Leon Panetta doesn’t sit down and just sort of write this off the top of his head because he feels like doing it.”

“Why do people draft memos for the record,” asked Mukasey.

Kelly responded, “generally, in litigation, it’s to cover yourself.”

Kelly questioned whether Obama could mount a credible defense of his administration based solely on a memo from the CIA Director. “I have no idea,” said Mukasey. He said that, having spoken with members of the military close to the White House, that “there was a good deal more hesitation than has been suggested.”

Mukasey said that President Abraham Lincoln would not tolerate criticism of his staff when military operations conducted during the Civil War failed, but shared credit with his staff when the South capitulated.

That night, he made a speech from the window of the White House. [He] specifically disclaimed credit for himself and gave it to Gen. [Ulysses] Grant and the troops and talked about the upcoming problems of reconstruction. Look at [Gen.] Dwight Eisenhower just before the Normandy landings. He drafted a memo in case they didn’t succeed… he said ‘I picked the place where we landed. The troops, the airmen all did their best and their most valiant. Any blame belongs to me.

Kelly read portions of that famous memo drafted by Eisenhower where he claimed responsibility for the failure of the Normandy landings. When it was clear that the landings had succeeded, Mukasey said that Eisenhower’s statement was far less self-congratulatory. “He referenced himself only in the last line. He said, “I’m proud of you,” said Mukasey. “Big difference.”

Kelly said that Obama did give credit to the SEALs and asked what was controversial about his statement. “To put yourself in the middle of that is really questionable,” said Mukasey.