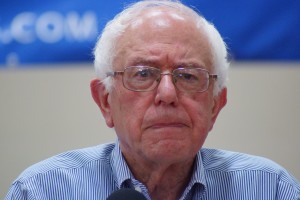 According to data published by Political Wire on Wednesday, it appears that Bernie Sanders supporters helped tip the general election for Donald Trump.

Fewer than 80 percent of voters who voted for Sanders in the primary cast their general election ballots for then-Democratic nominee Hillary Clinton, and some 12 percent of them voted for Trump. Twelve percent might not sound like much, but in this case, this number is eye-catching, even shocking, for a number of reasons.

For starters, Sanders and Trump espoused polarizingly different world views — Sanders preached of love and equality, where Trump scapegoated minorities and promoted an agenda attacking LGBT people, women, and essentially everyone but wealthy white Christians. That 12 percent of Sanders’ voters turned out for Trump in the general shows that the self-identified Democratic socialist’s message was vastly misinterpreted.

In either case, there was something Sanders and Trump had in common — an emphasis on a corrupt political establishment and broken economy. To voters who some label “Bernie Bros,” stereotyped as white male individuals who think we, as a society, have moved past the oppression of women, LGBT people, and people of color, these issues — a broken economy and political system — meant more than anything. Certainly more than the rights and dignities of marginalized, vulnerable Americans, and certainly more than women’s rights.

What moved this unsettling 12 percent from Bernie’s camp to Trump’s was also very likely vengeance. Resentment for Hillary, DNC leadership, and Democratic donors whom Sanders supporters believe rigged the election made the idea of her victory more difficult to swallow than the idea of Trump’s. Their votes were likely made to punish an “establishment” that, while imperfect, would have surely protected immigrants, the environment, women, and a number of other groups presently suffering under Trump from the policies he is now imposing on them.

But perhaps the vote was also meant to punish another group — the “internet social justice warriors” who exhaust “Bernie Bros” with their endless talk of identity related struggles. Contrary to what an unsettling amount of Bernie supporters, who may have gone on to vote for Trump, believed, economic justice will heal many but not all societal injustices, and dialogue about what needs to be done to protect and enfranchise minorities, women, and other vulnerable groups needs to be had.

To his credit, following his loss in the primaries, Sanders went all in for Clinton, recognizing that the Supreme Court, the world environment, women’s rights, LGBT rights, and the rights of Muslims, immigrants, and all people of color were at stake. It was not the time for political grandstanding, and he knew it. His voters who went on to vote for Trump are certainly not representative of Sanders, himself, but their actions suggest the haunting, potential dangers of running solely on an economic, anti-establishment message.